We were astonished by an opinion piece in the New York Times the other day authored by Sarah Prager, headlined “Saying Goodbye to Hanukkah” and carrying the sub heading, “I lit the menorah as a child but my kids are growing up in a different type of household.”

We were rather expecting a signature Times pre-Yom Tov hit job about a disillusioned Jew who had finally had enough with Jewish saga and ritual. But such did not turn out to be the case.


Instead, we were treated to a strange biographical piece by a self described non-Jewish woman who said she grew up with a wholly non-religious Jewish father who nevertheless wanted his children to recite the blessings over the Chanukah candles and a Catholic mother who observed Christmas and Easter in non-religious ways. She is now “married” to a woman and has two children.

Prager said the menorah had no special significance for her or anyone else in her family, nor did she express resentment at being exposed to menorah lighting. She also did not say she had any particular problem with the Chanukah narrative or that its teachings somehow failed her. Nonetheless she still wanted to explain why she wouldn’t expose her children to menorah lighting.

Prager wrote that her family growing up acknowledged the holidays of many religions in a Unitarian Universalist meeting house:

We celebrated every holiday secularly, like Halloween or Thanksgiving – except  Hanukkah. Each of those eight nights we’d recite the Hebrew prayer about God while lighting the menorah. We memorized the syllables and repeated them, but they had no meaning to us and my parents didn’t expect, or want, us to believe what we were reciting. We were trying to honor my dad’s heritage, but it wasn’t a custom he truly wanted to hold on to….

Over time…my family stopped celebrating Hannukah altogether. Christmas       continued to be the most important holiday of the year, and my sense of Jewish heritage diminished…. So our two daughters will celebrate Christmas and Easter because that’s what my extended family still celebrates. We’ll do so simply to see our families at the time they want to gather and because we feel at home in those traditions. Just like I did, my kids will celebrate Santa and the Easter Bunny, not a religion….

I respect the incredible value of keeping traditions alive, especially those that centuries of persecution have sought to erase. But while I have more of a connection to Judaism than some, I am not Jewish and it doesn’t feel authentic to celebrate a Jewish holiday religiously. My kids may end up playing dreidel sometimes, but they won’t learn the prayer that begins…[with] sacred words that are nonetheless empty to them….

This strange and unpredictable year has made me yearn for routine, but it’s also helped me gain clarity. I see that forcing a tradition just because it was a part of my childhood is not what my kids need. They need love and connection – no menorah required.

Prager’s theme seems to be that she has no use for religious belief per se but is not averse to benefiting from the tug of its traditions. She singles out Chanukah for particular mention only because her extended family no longer pays homage to any aspect of the Festival of Lights but does still honor Christmas and Easter.

From our perspective, Prager’s story of a non-Jewish woman abandoning a classic Jewish tradition for reasons wholly unrelated to it is rather pedestrian even given some of its provocative elements. So we are perplexed why she thought anyone would be interested in reading it. Even more perplexing is why The Times thought it so significant as to want to share it with its readers. 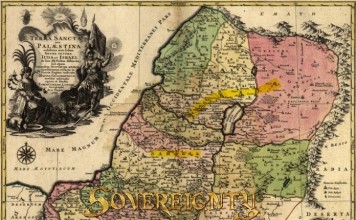 Sovereignty: It’s Not Just a Question of Land