The Palestine Pavilion at the 1939 World’s Fair was one of the seminal events in both American Jewish history and the rebirth of Israel. In fact, the entire fair proved very popular among Jews, who playfully referred to the Trylon and Perisphere – the defining icon of the fair –as the “lulav and esrog.”

The modern World’s Fair, or Universal Exposition, originated in the French tradition, as manifested by the French Industrial Exposition held in Paris (1844). This fair led to other national exhibitions throughout Europe, the most famous being the First World Expo – titled the “Great Exhibition of the Works of Industry of All Nations” – which was held in the Crystal Palace in Hyde Park, London, in 1851.

Naturally, particularly in the shadow of Hitler and the rise of Nazism in Europe, Zionists sought to participate in the fair as an expression of political Jewish sovereignty, and they dreamed of displaying their flags, singing their anthems, presenting their honor guard of chalutzim, and establishing their pavilion like any other state.

Zionist leaders understood their inclusion in the world of nations at the Fair would constitute a powerful argument for international legitimacy. 0

The Jewish role in previous fairs had been essentially limited to classification as a religious group, but all that changed with the 1939 World’s Fair, held at Flushing Meadows in New York City, due primarily to the efforts of impresario Meyer Weisgal (1894-1977), who directed the creation of the Palestine Pavilion at the fair.

Weisgal specified three goals for the Pavilion: first, to gather support for the Zionist cause; second, to protest against Nazi Germany and raise funds for Jewish refugees from Hitler; and third, to put on a strong show of Jewish solidarity on the grand world stage.

Organizers of the Pavilion, led by Weisgal, petitioned the fair’s planning board for space in the fair’s “International Zone,” but the request was summarily rejected because strict guidelines permitted only established countries – which “Palestine” certainly was not.

(How richly ironic that in short order many of the European “established countries” – including France, Czechoslovakia, Poland, Belgium, Finland, and Austria – essentially ceased to exist, in terms of independence and sovereignty, due to the Nazi conquests in World War II.)

In an unexpected concession, the fair’s organizers suggested that Palestine, then under the British Mandate, could participate under the banner of Great Britain. Not surprisingly, the British, given the tense state of affairs in the Mandate, quickly rejected the idea. Fair organizers ultimately granted exhibition space to Palestine in the “Community Interest” zone – but the Arabs, the British, and even the State Department were enraged when the Jewish organizers planned to call their exhibition “the Jewish National Home in Palestine” or “the Land of Israel.” The ultimate choice – the “Jewish Palestine Pavilion” – did little to assuage them.

Though Weisgal failed in his attempt to locate the Pavilion among the other nations, the anti-Jewish Palestine forces were incensed that he succeeded in convincing fair officials to permit the Palestine Pavilion to fly the Zionist flag, to be included in the fair’s Book of Nations, and to be represented in the Parade of Nations, all of which constituted indicia of governmental sovereignty.

Exhibit 2 is a small booklet that proudly touts The First Palestine Exhibit at an American World’s Fair…. Bringing to America the Story of Jewish Achievement. The text inside explains that that the Palestine Pavilion

will constitute the first complete panorama to be shown at the American World’s Fair of the transformation that a few decades of Jewish colonialization have wrought in the Holy Land…. The Pavilion will include ten exhibition halls dedicated to various aspects of Jewish life in Palestine today…. The exhibits to be shown at the Pavilion are now being completed in Palestine, where they are being built by Jewish craftsmen out of Palestinian materials…

Weisgal cleverly and pointedly planned the exhibit in order to present Zionist ideology as consistent with the fair’s general theme, “Building the World of Tomorrow,” and he conceived the idea of making the Pavilion a “miniature Palestine in Flushing Meadows” and for the building itself to be “authentically Palestinian.”

A flagged courtyard centered the Pavilion, and fifty varieties of trees and plants native to Eretz Yisrael were planted around the courtyard, including orange, lemon, lime, fig and date trees, and lotus and papyrus plants that grew out of the pool. The Pavilion also featured basalt from the Sea of Galilee; special bluish-gray marble from Givaat Hahamishah; striking mosaics brought from the ancient synagogue of Beth Alpha; and a cornerstone brought from Hanita.

After a successful fundraising drive, Dr. Thomas Mann, the German novelist, social critic, philanthropist, and staunch anti-Nazi who in 1929 had been awarded the Nobel Prize in literature, dedicated the cornerstone of the Palestine Pavilion on May 13, 1939. New York Mayor Fiorello La Guardia welcomed the exhibit because of its “special significance at this time, when the problem of a refuge for Jews persecuted by the totalitarian governments is growing more acute from day to day.”

Though the actual formal dedication, which took place two weeks later on May 28, had to be postponed because the Pavilion had not been completed, it was unofficially opened a few weeks early to satisfy high public demand –

Exhibit 3 is Facts About the Jewish Palestine Pavilion at the NY World’s Fair – 1939, a mini-booklet distributed at the unofficial opening of the Pavilion. Weisgal’s conclusion constitutes a succinct statement of the Pavilion’s aims:

For more than forty years the people of the world have been listening to the struggle of a homeless people to recreate and reinhabit the ancient land of their forefathers. To most people this story has remained the tale of far-off accomplishments. Now, for the first time, through the Palestine Pavilion at the forthcoming World’s Fair, millions of people will be brought into physical contact with Jewish Palestine. With their bare hands the Jews have wrested a fertile, thriving community from the heart of a barren wilderness. It is the triumph of life defeating death, the victory of Jewish idealism, courage and tenacity.This is the story which the Palestine Pavilion will attempt to tell to the millions that will come to visit the World’s Fair.

Also exhibited here, as Exhibit 4, is The Jewish Palestine Pavilion – A Monument to Zionist Achievement in Eretz Israel, a pamphlet issued by the Zionist Organization of America. It shows the Pavilion, which was designed by Arieh (Sapoznikov) El-Hanani, and “The Scholar, the Laborer, and the Toiler of the Soil,” the immense hammered copper relief sculpture at the facade of the Pavilion building by sculptor Maurice Ascalon, the “father of modern Israeli decorative arts.” 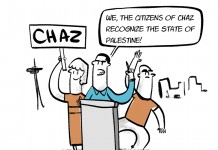 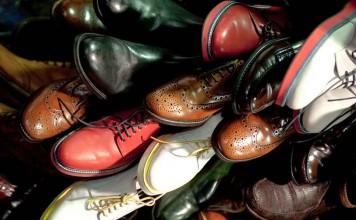 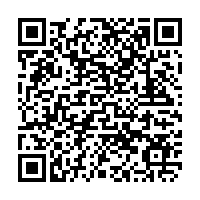