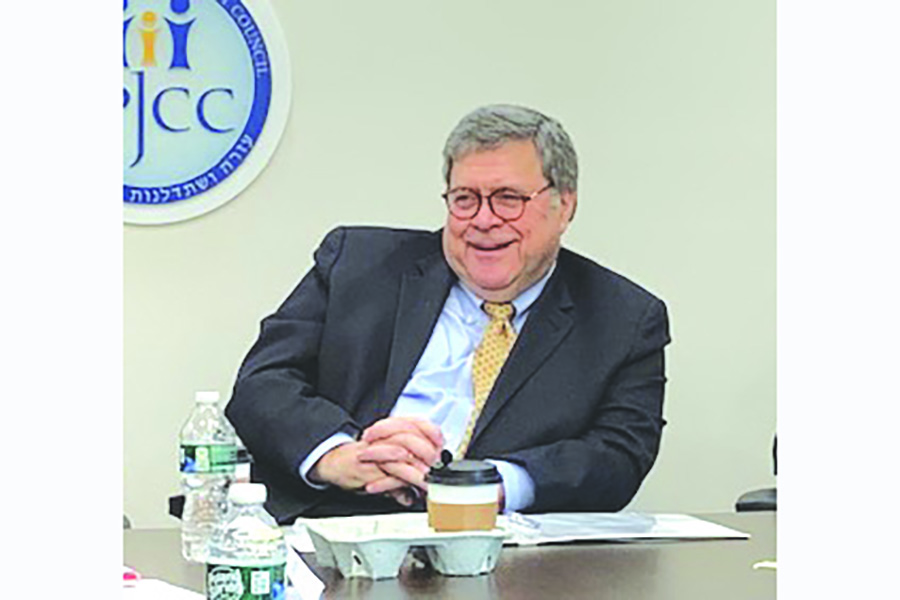 On Tuesday, William Barr – the attorney general of the United States – visited Boro Park in Brooklyn, NY, where he discussed the recent rise in anti-Semitic attacks with seven Jewish communal leaders. Following that meeting, Barr sat down for an exclusive 20-minute interview with The Jewish Press.

The Jewish Press: The U.S. Department of Justice, which you head, has recently targeted several perpetrators of anti-Semitic crimes in New York. Considering that these kinds of crimes are usually prosecuted on the local level, did you find the NYPD cooperative when you stepped in? Did it share information with your department the way you wanted it to?

Barr: I’ve found the New York Police Department to be exceptional. It’s one of the best police departments to deal with, and I think it’s concept of targeted policing has been very effective in New York.

I am worried about this legal reform [of New York criminal law]. I think the inability to either charge or hold [someone for] crimes that people might view as petty crimes is going to lead to a deterioration of conditions in neighborhoods.

During your meeting with Jewish community leaders this morning, you seemed to say that federal funding to protect Jewish houses of worship can only be increased if funding for all houses worship is increased. Did we understand you correctly?

What I meant was if you give money to a jurisdiction, it would probably have to be for the protection of all houses of worship.

Couldn’t the department say there’s a specific anti-Semitism problem it wishes to address?

I think you can say that for a period of time. So in response to a shooting at a Jewish school or something, you can focus on the risk…

But long term you can’t.

Long term, you’d have to make sure that everyone has adequate protection. You may be able to do some kind of risk-based analysis…. I haven’t thought through all of the details.

In some jurisdictions that I’m familiar with, there’s a local police car in front of churches or synagogues on days of worship as a matter of course. Why can’t all police departments do that? And if they can’t, we [in the federal government] need to offer them [additional resources].

Much has been written about white supremacy as a cause of anti-Semitism. Almost without exception, though, the anti-Semitic incidents in New York have been committed by people of color. Do you think there’s been too much focus on white supremacy?

Well, I wouldn’t say “too much.” I would say we have to definitely broaden our focus. There are different strains of anti-Semitism. The new phenomenon is the emerging threat from the left and politicians who won’t condemn clearly anti-Semitic activity, which never would have happened 20 years ago.

There may be historical factors and community frictions involved [in the anti-Semitic attacks] in New York, but I also think we have to [examine] the extent to which identity politics – the “them vs. us” kind of mentality – affects that and gives justification for and may be exacerbating the problem.

Many of our readers are concerned by anti-Israel animus on college campuses and were pleased when President Trump signed an executive order that tied federal university funds to tolerance of more conservative points of view (like support of Israel) on campus. What has happened since then? Has this order been enforced?

That’s a good question and better directed to the Secretary of Education. I haven’t discussed it with her, but it’s an area of real personal interest to me. I felt marginalized [myself when I was a student] at Columbia University. Those were the days of the anti-Vietnam War riots and things like that.

I am stunned by the “great” diversity at a lot of these colleges. There’s no diversity of thought. So it’s not directly in my bailiwick, but I think it’s important that we have academic freedom and free speech, and certainly not persecution or harassment of people because of their ethnicity or their ideas about the legitimacy of Israel.

In a recent op-ed in The New York Post, Sohrab Ahmari argues that America’s obscenity laws should be revived to limit the exposure of youth to Internet pornography, which, needless to say, is highly corrosive to one’s soul. Is there anything you can do as attorney general to protect children from this spiritual danger?

The Department [of Justice] for many years has focused its efforts on child pornography, and one of the alarming things I found when I returned [as attorney general] was that there’s been an upsurge in it. So we have our hands full right now dealing with child pornography.

Regarding other kinds of pornography: You’re dealing with legal issues like community standards, legal challenges relating to the First Amendment, and [the question of] whether local juries and prosecutors [would enforce such laws]. I think the first step would be to have more control of access rather than banning the material outright.

The next step would be to research and analyze its impact on the development of young people, especially, and trying to build a greater public consensus about its harms to society. Right now, given the crisis we’re facing with child obscenity and child exploitation, I don’t think there would be a broad consensus for a big crackdown on other kinds of pornography. I think it will take some time to develop more information about it and more of a consensus.

In his op-ed, Ahmari suggests making the default Internet clean with an “opt-in” option for people wishing to access a different kind of Internet.

Any young kid surfing the Internet today can come across some gross stuff, and so-called parental controls aren’t really working, so the first step that I’d like to see is more control of access.

In a speech last year at the University of Notre Dame, you said, “Secularists, and their allies among the ‘progressives,’ have marshaled all the force of mass communications, popular culture, the entertainment industry, and academia in an unremitting assault on religion and traditional values.” What advice would you give traditional-minded Americans who wish to combat this problem?

First, I would say continue to build a strong community and continue to educate your children in your faith. Second, be a strong voice in the marketplace of ideas as well as in legal forums where many of these attacks are launched.

I [have always found] in dealing with the Orthodox Jewish communities that they were very well-organized, very focused on the issues, and willing to weigh in to the public debate – and I think that’s great.

Some might argue that weighing in so often causes anti-Semitism because it plays into the charge that Jews have too much influence.

Not outside New York [they don’t]. I would like to see more influence of Orthodox Jews.

Historically, there have been many conspiracy theories about Jewish influence and so forth, but if you let that paralyze you and don’t stand up for what’s right and the rights of your community, you’ll end up losing them.

I myself have been attacked as a member of a secretive Catholic cult, which I’m not [They say I belong to] Opus Dei or the Illuminati, pulling strings [behind the scenes], and so forth. That’s one of their trademark modes of attack. It’s their playbook.

Many conservatives today regard the Justice Department with a measure of cynicism after seeing the way it hounded Republicans like Paul Manafort and Roger Stone but not Democrats like John Brennan or Tony Podesta. Many Orthodox Jews likewise lost some faith in American justice after Sholom Mordechai Rubashkin (whom you publicly defended) was thrown in jail for 27 years for committing a relatively minor crime. What can you do to restore the public’s faith in the Justice Department?

One of the hallmarks of many of these prosecutions that are perceived as unfair is that the investigations are done very quickly, the charges are very murky, and an unpopular person is put before a jury. I think a good investigation takes some time. You really need to have evidence that would objectively prove to a reasonable jury that the person is guilty beyond a reasonable doubt.

I think the single most important obligation of running the Justice Department is to make sure there’s one standard for everybody. And I personally feel that standard was diluted and that there have been injustices.

But I think the solution is not to dilute the standard but to insist on a high standard for everybody. That’s my basic approach. And I am committed to doing that. 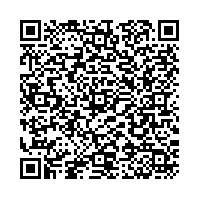