A vigorous advocate of aliyah, Yishai Fleisher uses his position as Internet radio personality and director of programming at Arutz Sheva’s Israel National Radio to promote the merits of living in the land of Israel. On his popular show “Yishai and Friends,” Fleisher deals with Israeli politics, history and tradition and has interviewed personalities ranging from Dutch politician and filmmaker Geert Wilders to actor Jon Voight.


Fleisher, a graduate of Cardozo School of Law, is also director of Kumah, an organization dedicated to encouraging Jewish immigration to Israel. An address by Fleisher to the Knesset Absorption Committee helped lead to the establishment of International Aliyah Day in 2008, five years after he himself made aliyah and settled with his family in Beit El.

The Jewish Press: How did your background contribute to your Zionist beliefs?

Fleisher: I was born in Haifa to Russian refusenik parents who came to Israel in the early 1970s. While in Russia, my mother was constantly being interrogated by the KGB and my father was imprisoned for Jewish activities. They managed to get out and were great Zionists who raised me with lots of love for the land. That set the tone for the rest of my life.

When I was eight, we moved to America due to economic considerations and became close to Yiddishkeit. I ended up going to an Israeli Hesder yeshiva in Ma’ale Adumim when I was seventeen, served as a paratrooper with the IDF and was injured in Lebanon. I returned to America but, after finishing up law school, came to the conclusion that the center for the Jewish future is not going to be in New York. The center for the Jewish future is in Israel. It was time to come back home.

You started Kumah, a self-described “neo-Zionist lobby.” What is the aim of this organization and how do you explain its slogan?

Kumah is a revivalist movement with a classic message for the Jewish people. To me Zionism is the yearning of the Jewish people to come back to the land of Israel with the creation of the Jewish commonwealth and the era of the third Temple. It’s a renewal of lost values, and an answer to post-Zionism. If post-Zionism is the theory that Israel was created and the project is now finished, then neo-Zionism states that we are far from done with the project. The Jewish people are not yet back home, and we have yet to educate Jews to the concept of living a Torah life in the land of Israel.

Rather than the idea that the Zionist project has been completed, isn’t post-Zionism more a negative spin on the nature of Zionism?

No question about it. Post-Zionists are anti-Zionists. There are a few of them that are real leftists – a people who care about social rights, the environment and such. I should really be considered left wing because I care about the rights of the aboriginal people to come back to live in their homeland, i.e., the Jewish people to live in their homeland. This tiny minority of people fighting against the UN, the EU and the U.S. is really the epitome of what the left should represent – protecting the weak. That’s why I really don’t use the term right and left anymore. I think better terms are nationalists versus post-Zionists.

How do you view your position as Arutz Sheva radio host?

I do not sit around all day complaining about the Israeli government. My job as I see it is to fight cynicism. I see so much cynicism, so many people not seeing that we are living in amazing times. I am the head of the radio department, a job that I see as all about sharing ideas and a spirit, and we’ve been pushing aliyah with a lot of success. We got halfway done with bringing Jews home and creating the state of Israel. What’s so ironic is that at this time, with so much foundation for Israel to be that amazing thing called the “light unto the nations,” suddenly the motivation and the ideology have totally bottomed out. We need to put the spirit back into the people and get through this [negative] husk that has been put over our eyes.

Do you see Arutz Sheva’s nationalist ideology driving many of its news stories?

I think Arutz Sheva has an agenda and a perspective. But I respect Arutz Sheva for not masking that or hiding it under the guise of objectivity, like Haaretz for example, which is really the mouthpiece for post-Zionism. The media is not this god of objectivity – that’s a lie. To think that The New York Times is objective is a farce. It’s much more honest for us to say we have a nationalist perspective.

Would you agree that the Israeli government’s decision to shut down Arutz Sheva as a radio station in 2003 highlights a systemic and one-sided problem of freedom of the press in Israel?

No doubt about it. Arutz Sheva was shut down for a reason, in order to stop its perspective from getting out. Its perspective was painted as violent and inciteful, but nothing could be further from the truth. Arutz Sheva’s perspective is one of love of Jews and patriotism. It was shut down months before the Disengagement was announced, and that is not a coincidence. Ariel Sharon understood the power of Arutz Sheva, which was giving people what they want – a true, proud Hebrew and Jewish culture. It was cut off to stifle that opinion.

A free press is the cornerstone of an open and vibrant democratic society. Here in Israel, every time there’s any move toward free press, they clamp right down on it.

In the face of Israel’s uphill battle on so many fronts, what advice would you offer Jews living in Israel and those contemplating aliyah?

Even though there is so much wrong here, it is incumbant upon Jews not to give up on this country; we all need to say, “I’m going for the long haul.” 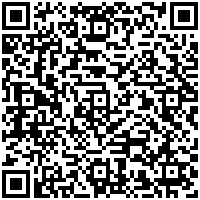