Education Can Succeed
Only If It Is Affordable

The article by Rabbi Lord Jonathan Sacks, zt”l, on the importance of Jewish education (“Education: The Key to Success,” April 15) was very poignant and brought to mind an oft-discussed topic: the affordability of the very Jewish education that he so correctly indicated was crucial to our continuity as a people.


Many families struggle with the financial strains of providing this vital aspect of chinuch to our children and grandchildren. Some communities handle this conundrum quite admirably, many, not very well at all. Very often it becomes a matter of either going into unmanageable debt or forgoing this important component of a Jewish child’s formative process altogether. Requests for financial assistance from institutions may involve filling out voluminous reams of application paperwork as well as providing untold details of the applicant’s financial circumstances – under demeaning circumstances at times.

Yes, it costs money to provide quality Jewish education, but this seems to be devolving into an option for only those who can afford it, with many left to suffer the lack of a foundation for future Jewish generations. And yet we decry the proliferation of assimilation, chas veshalom. A balance needs to be found to address the legitimate financial concerns of educational institutions and parents so no Jewish child goes without the requisite tools to build and maintain Jewish homes.

I unfortunately don’t profess to have any magic solutions, but I do wish to bring this issue to light as done by others in the past. Perhaps the streamlining of top-heavy administrations can facilitate some cost savings. Making Jewish education more of a communal financial responsibility may also help alleviate the situation. Remember, the boy or girl we educate today may be your daughter’s or son’s bashert down the road, the primary link to generations down the road.

May Hashem grant and bless us all with the wherewithal to be able to provide this crucial aspect in the ongoing chain of Klal Yisrael to every single child, as Rabbi Sacks so aptly proclaimed.

Regarding Rachel Kohn’s front-page article (“The Genizah Journey,” April 8), I’d like to commend Ms. Kohn on her well-researched and timely article on shaimos. I’ve given my rabbi items over the years, and have accumulated many photocopied pages from Haftorah books that needed to be buried during my 11 years as a bar mitzvah tutor. My shul has its own cemetery, and with the approval of the family, we have discarded siddurim next to the deceased’s coffin. I didn’t realize the volume of shaimos collected and your article was an eye-opener.

Thank you again for a terrific article.

Where Is The Outrage?

Antisemitism and anti-Israel feelings and violence are increasing at an alarming rate in the United States, in its halls of congress and government, in the United Nations, in Europe, and among Israel’s hostile neighbors. Yet there is no condemnation from the outside world.

But even in the Jewish communities, there are no organized voices raised in outrage. No protests, no demonstrations, and no call for action. Not from individuals, and most disturbingly, not from the very organizations that are supposed to be representing and supporting Jewish communities. After mass shootings or particularly heinous acts of violence against Jews or Israel, these organizations issue the predictable press releases condemning the violence, but otherwise, initiate little real substantive actions. Mostly silence and a return to business as usual, which includes more complaining about antisemitism.

This is in contrast to the loud outpouring of outrage, indignation and horror, sometimes accompanied by mass acts of rioting and destruction, when acts of violence are directed against other minority groups like the whole spectrum comprising “people of color,” Blacks, Hispanics, Asians, and Muslims, as well as the whole alphabet of people comprising the LGBTQIA community.

There are two culprits in the lack of Jewish response: organizations and individuals. As for the organizations, many had been the bedrock of American Jewish communities in the past, like JDL, HIAS, ACLU, and Jewish Federations. But these now have, to a disturbing degree, succumbed to the siren call of the liberal left, and either stopped representing the Jewish community completely, or have partnered with the woke radical left and are now aligned with, and support, the very organizations that promote anti-Jewish policies like the BDS movement, pro-Palestinian causes, or label Israel as an apartheid state.

The other culprits are the individual Jews who feel that single voices carry no weight, not realizing that a mass of single individuals makes a big crowd, with power that can’t be ignored. With this in mind:

If only 20 people from each shul each wrote just one word a day, that would be seven words a week, or one sentence. That single sentence each week would be four sentences a month, or one paragraph. One paragraph is a respectable short letter. That would amount to 20 letters a month from each shul, which would send a significant message. With those 20 letters a month, over the course of a year, each shul alone would send 240 letters to designated targets. If every shul did the same, it would amount to thousands of letters a year. That would be power! And all it would take is people writing just one word a day.

There is no excuse for Jews being passive onlookers to the ever-increasing violence being directed specifically at them. Remember the words attributed to Edmund Burke:

“The only thing necessary or the triumph of evil is for good men to do nothing.” 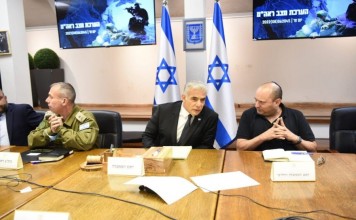 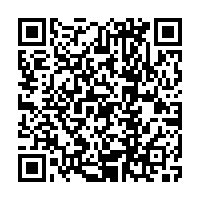