In the aftermath of the recent elections in the US and Israel, something is in the air. Recent actions by the Biden administration seem to point not only to a new level of animosity towards the Jewish state but also to new levels of double standards being applied to Israel.

The US Department of Justice recently informed Israel that the FBI is going to open its own investigation into the death of Shireen Abu Akleh. This comes after the State Department announced months ago that it was satisfied with the results of the IDF’s own investigation, which found that an Israeli soldier may have inadvertently shot Abu Akleh, but unintentionally. The White House claims that this new decision was made without its knowledge and that even US ambassador Nides was originally unaware of the decision.

Putting aside the level of ineptitude this implies on the part of the Biden administration and how this leaves the US soldiers open to requests for similar investigations in the future, the question remains: why should the US request for an investigation of the death of a US citizen be limited just to Abu Akleh?

Isn’t there a murder of another US citizen that the Biden administration can pursue?

So while The Washington Post claims that Accountability is justified — and needed — in a U.S. reporter’s death:

Arnold Roth asks whether it is equally reasonable to ask the same of Jordan: 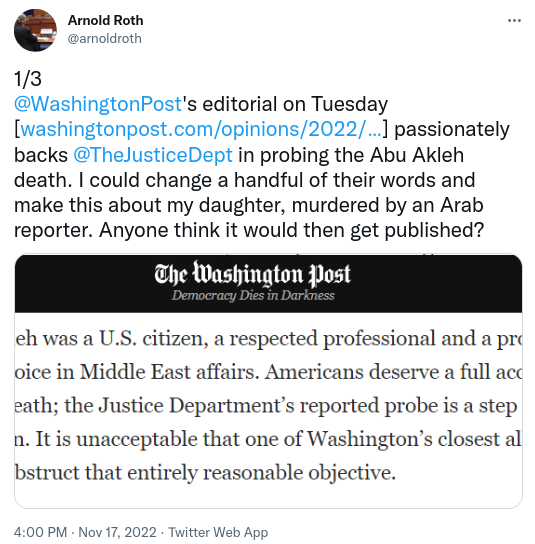 The Washington Post would not publish such an editorial.
And the Biden administration has taken no interest in extraditing the murderer of this US citizen (not that previous presidents did either).

Already, another has also asked for the US to extend this newfound quest for justice to their case as well.

Last week, Tamir Avichai, Michael Ledigin and Moti Ashkenazi were murdered in a terrorist attack in Ariel. In an unusual move, the US ambassador to Israel, Tom Nides, made condolence calls to the families of all 3 men, including the family of Tamir Avichai in Kiryat Netafim — in the West Bank. The US embassy made clear that the visit did not indicate any change in US policy towards the West Bank.

Avichai’s brother made use of the visit to make a special request from the US ambassador:

Of course, since none of the 3 men are dual citizens of the US, the request will be ignored.

But by the same token, now that the White House has appointed Hady Amr as Special Representative for Palestinian Affairs, in order to “engage closely with the Palestinians and their leadership and…continue to engage with Israel on Palestinian-related issues” — wouldn’t that be a great opportunity for the US to take a more active role with the Palestinian Authority to encourage Abbas to prevent terrorist attacks and to investigate them?

Another double standard in US Middle East policy showed up in the Biden administration’s condemnation of Itamar Ben-Gvir when he attended a memorial service for Meir Kahane, a week after the Israeli elections.

US State Department spokesperson Ned Price condemned Ben-Gvir’s appearance there, saying that “celebrating the legacy of a terrorist organization is abhorrent.”

“There is no other word for it – it is abhorrent. And we remain concerned, as we’ve said before, by the legacy of Kahane Chai and the continued use of rhetoric among violent right-wing extremists,” Price said, adding that Washington has listed the group as a Specially Designated Global Terrorist organization.

The Coalition for Jewish Values (CJV), a pro-Israel group that represents over 2,000 American rabbis responded to the criticism with claims that the White House was guilty of a ludicrous double standard:

Attending a memorial for a murder victim is hardly ‘celebrating’ terror, especially as Ben-Gvir carefully said that he did not agree with the deceased’s positions. But more significantly, if the US Department of State were genuinely concerned with support for terrorism, it would not be enhancing its relationship with the Palestinian Authority, much less providing funding that ends up indirectly financing its infamous ‘Pay to Slay’ program.” [emphasis added]

The Biden administration is clearly making an effort to overlook Palestinian terrorism as it increases funding to the Palestinian Authority and seeks to shore up the validity of this kleptocracy.

Similarly, last week Biden made a point of supporting Saudia Arabia Crown Prince Mohammed bin Salman by backing up the idea of granting him immunity from a lawsuit for his role in the 2018 murder of Jamal Khashoggi. US officials even went so far as to claim that bin Salman had personally approved the murder.

While on the campaign trail, Biden had no problem condemning the crown prince and promising to make him a pariah:

I think it was a flat-out murder. And I think we should have nailed it as that. I publicly said at the time we should treat it that way and there should be consequences relating to how we deal with those — that power.

Of course, now that the Biden administration needs Saudi influence and oil, the president has reversed himself.

His reversal on Saudi Arabia is not much different from the way Biden has backtracked from criticisms he made of the Palestinian Authority when he was on the campaign trail.

But Biden had perhaps even harsher words for the Palestinian Authority, seemingly blaming them for a failure to reach new peace accords. He said they still got “98% of what they wanted” when President Barack Obama was in office with Biden as his top lieutenant.

“They continued to insist on baiting everyone who is Jewish, saying they would not sign a deal with a Jewish state, will not recognize one even if we have an independent nation,” Biden said.

Biden said that, as president, he’d continue to push Israel to accept a Palestinian state, but added that he’s “tired of everybody giving the Palestinian Authority a pass … as if they’re not continuing to foment all of this.”

Biden is giving a pass:

to Jordan, which is protecting the confessed murderer of a US citizen
to Saudi Arabia, whose crown prince allegedly approved the murder of Jamal Khashoggi
to Abbas and the Palestinian Authority, who reward terrorists and their families

The Biden administration’s Justice Department is ignoring an investigation in which they participated and whose results they approved — giving more ammunition to Israel’s enemies. 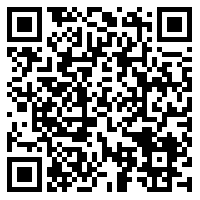