The revelation that Hezbollah has doubled the arsenal of advanced guided missiles it keeps trained on Israel during the course of the past year is a timely reminder that Iran, together with the numerous terrorist proxies it supports throughout the Middle East, promises to present the incoming Biden administration with its most critical foreign policy challenge in 2021.


In many respects, so far as the ayatollahs are concerned, 2020 has been a year to forget. The year, for them, got off to a bad start when the Trump administration succeeded in carrying out the assassination of Qassem Soleimani, the iconic head of Iran’s Islamic Revolutionary Guard Corps’ Quds Force — the man who, as a trusted confidante of Supreme Leader Ayatollah Ali Khamenei, was primarily responsible for disseminating Tehran’s malign influence throughout the region.

In addition, the Iranian regime has seen its economy eviscerated by the Trump administration’s punitive sanctions regime, which President Donald Trump implemented after withdrawing from the hazardous nuclear deal with Iran that would ultimately have allowed it to have nuclear weapons. As a consequence the rial, the Iranian currency, has lost more than half its value, while inflation and unemployment are both running at well above the 20 percent mark.

The mullahs have also had to contend with intense domestic criticism over their handling of the coronavirus pandemic, with the regime facing accusations that it has been too slow to respond to the challenge posed by Covid-19, and has deliberately sought to cover up the true number of fatalities.

With Iran’s presidential elections due to take place in June, the regime’s rulers are clearly desperate for some good news they can relay to their sceptical electorate.

So the announcement by Hassan Nasrallah, the head of Iran’s proxy Hezbollah militia in Lebanon, that the terror group has, despite all the setbacks Tehran has suffered during the past year, achieved a significant increase in the number of missiles it has aimed at Israel, will be music to the ears of Iran’s ayatollahs as they seek to present their track record in a positive light ahead of the elections.

Mr Nasrallah, who made the announcement during a four-hour interview on a pro-Hezbollah Lebanese television station earlier this week, claimed that the group’s Iranian-made precision missiles were now capable of hitting targets anywhere in Israel, as well as the West Bank and Gaza.

The Hezbollah announcement — if true — constitutes a serious escalation in Iran’s ability to attack Israel, especially as Iran’s Revolutionary Guards are understood to have deployed similar weapons at newly-constructed bases in Syria that are located close to the Israeli border.

Even if it transpires that Mr Nasrallah, by making the claim, is seeking to boost Hezbollah’s standing in Lebanon after the criticism it has received for the Port of Beirut explosion in August, Israel is unlikely to tolerate the existence of such powerful weapons so close to its border.

Tensions are already running high between Tehran and Jerusalem following reports earlier this week that Israel is deploying one of its submarines to the Persian Gulf, a move that prompted an angry response from Abolfazl Amouei, spokesman for the Iranian Parliament’s National Security and Foreign Policy Committee, who described the Israeli move as “an act of aggression”, and warned that Iran reserves the right to respond.

While many military observers regard the Israeli move, which is being taken in conjunction with an increase in US naval activity in the Gulf, as a purely precautionary measure as the Trump administration draws to a close, hostilities between Israel and Iran can never be ruled out, a prospect that President-elect Joe Biden would be well-advised to take on board as he considers his foreign policy options.

There is eager anticipation among many of Washington’s foes that Mr Biden’s inauguration will result in the new president adopting a less confrontational tone with the outside world than his predecessor.

China’s communist rulers, for example, are hopeful that Mr Biden will engage in the kind of meaningless trade deals so beloved of his Democratic predecessor, Barack Obama.

These are the trade deals where Washington agrees to improve trade ties with Beijing on the understanding that China addresses the unfair trading relationship between the two countries, knowing full well that China’s communist rulers have absolutely no intention of fulfilling their end of the bargain.

There are similar feelings of optimism, too, in Tehran where the ayatollahs will be desperately hoping that Mr Biden will fulfil his promise to revive the nuclear deal and lift the sanctions, thereby alleviating Iran’s economic hardship and enabling its nuclear capability.

Before making any move that he may later regret, Mr Biden needs to think long and hard about the likely implications of trying to improve relations with Tehran.

As Iran has demonstrated consistently since signing the 2015 nuclear deal with the Obama administration, Tehran’s primary objective is to become the dominant power in the Middle East — not to live in peaceful coexistence with other nations in the region. 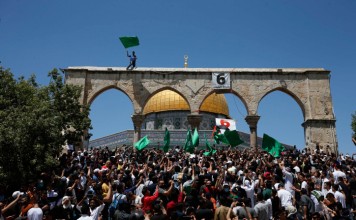