{Jonathan Greenberg is a guest columnist and this article originally appeared on the Breitbart.com website}

J Street, a progressive organization funded primarily by far-left individuals who are critical of Israeli policy and more sympathetic to the Palestinian cause, is holding its annual conference this week in Washington.


At a morning session titled “What’s Next for Palestinian Leadership,” attendees at the annual J Street conference were treated to an interesting discussion from moderator Muna Shikaki of al-Arabiya and panelists Huda Abuarquob of the Alliance for Middle East Peace, Khaled Elgindy of the Brookings Institution, and Palestinian businessman Sam Bahour.

The Palestinian leadership is a hot mess. Everything could be better if convicted murderer Marwan Barghouti were freed from Israeli prison and allowed to succeed Palestinian Authority President Mahmoud Abbas. And, from the discussion, you would not know there was a violence problem in Palestinian society.

The panelists mostly agreed that the Palestinian Authority is corrupt, feckless, and self-absorbed. And, while the “occupation” got some of the blame, there was general agreement that only Palestinians can solve these problems.

One panelist went so far as to say that Palestinian internal failings are “not your problem.” This said on the same panel insisting that Israelis had to negotiate with the PLO, an entity in a state of “total decay.” There was no allowance made for the fact that Israeli resistance to further fruitless negotiation might exist in exactly the context they were describing.

But what was totally missing from the discussion was the role that violence, Islamism, and terrorism play in Palestinian life.

As part of a discussion about how Israelis allegedly unfairly imprison on six-month administrative detention any Palestinian who shows leadership skills, Ms. Abuarquob told a story about a 54-year-old blind man she had met at an Israeli security checkpoint. The man had been pulled aside for further screening. She said, to much approving head-nodding, that Israeli soldiers “have been educated to see me as a threat.” She said that, if the Israelis see an old blind man as a threat, “what must they think of a visionary leader?”

Designed to tug on the heartstrings of liberals, that Dickensian tome of injustice is entirely incomplete without properly including the scourge of Palestinian terror and the dominance of Palestinian society by armed groups–neither of which was mentioned beyond a passing reference to rocket fire.

Jonathan Greenberg, an ordained rabbi and Senior Fellow at the Salomon Center, is a foreign policy and Middle East expert. 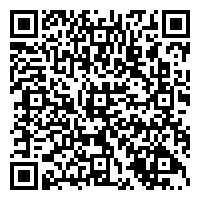