On Tuesday, the White House announced that Biden will host King Abdullah II of Jordan on Friday:

The President is pleased to welcome His Majesty King Abdullah II of Jordan and his Royal Highness Crown Prince Hussein to the White House on May 13, 2022. King Abdullah’s visit to Washington, his second of the Biden Administration, will reinforce the close friendship and enduring partnership between the United States and Jordan. Jordan is a critical force for stability in the Middle East and strategic partner and ally of the United States.

Jordan, of course, is the home of the terrorist Ahlam Tamimi, the self-admitted mastermind behind the 2001 Sbarro massacre that killed 15 people, mostly schoolchildren, including 2 Americans. A third American has been in a coma ever since.


In 2017, the US Department of Justice unsealed federal charges against Tamimi, declaring her an FBI Most Wanted Terrorist for conspiring to use a weapon of mass destruction against US nationals, and requested her extradition.

Arnold and Frimet Roth are the parents of Malki Roth, one of those killed by Tamimi, and have been pushing for Jordan to honor their extradition treaty with the US.

The Jordanian courts rejected the extradition out of hand, claiming that the treaty had not been ratified by the parliament and therefore carried no weight.

Actually, King Hussein of Jordan ratified the extradition treaty and put his personal assurances behind it.

Last year, in a post on Bari Weiss’s site, Common Sense, Arnold Roth revealed new documentation about the ratification of the extradition treaty by Jordan:

They contained a bombshell.

Writing in regal style and invoking the “guidance of God,” the late King Hussein declared in a July 13, 1995, document addressed to the U.S. government his personal agreement as Jordan’s sovereign “to and ratification of that treaty in whole and in part. We further pledge to carry out its provisions and abide by its Articles, and we, God willing, shall not allow its violation.”

Jordan betrayed the treaty, plain as day. But no U.S. government official has publicly addressed Jordan’s failure to comply with its treaty obligation, let alone protest the moral offense or the insult to American interests and decades of mutually beneficial relations. [emphasis added]

Here is the text Roth tweeted in March: 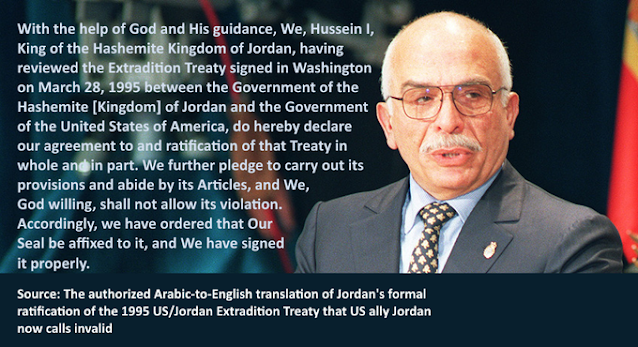 The Biden government is neither the first nor the only administration to fail to publicly address Jordan’s shielding of this terrorist. But it does have an opportunity to fix this failure.

Last month, US Representative Greg Steube introduced a bill that would apply pressure on Jordan to hand over Tamimi:

U.S. Representative Greg Steube (R-Fla.) recently introduced The Recognition of the 1995 Jordan Extradition Treaty with the U.S. Act to limit U.S. assistance to Jordan until the Government of Jordan recognizes the validity of the 1995 extradition treaty between the two countries.

“Our U.S. tax dollars will not continue to flow to a country harboring a Hamas Terrorist with American blood on her hands,” said Congressman Greg Steube. “The Government of Jordan is failing to comply with a 1995 treaty which requires them to extradite individuals like Ahlam al Tamimi who faces trial for terrorism under U.S. law. My legislation will ensure our foreign assistance to Jordan is abruptly halted until Jordan is in compliance with our extradition treaty.”

The U.S. and Jordan signed a Memorandum of Understanding on U.S. foreign assistance to Jordan which committed the U.S. to providing $1.2 billion per year in bilateral foreign assistance over a five-year period for a total of $6.3 billion between 2018 and 2022. This MOU represents a 27% increase in the U.S. commitment to Jordan above the previous agreements.

At a time when the US is struggling for influence in the Middle East in competition with both Russia and China, a recent poll finds that the US has the inside track when it comes to Jordan.

According to the poll by David Pollock of the Washington Institute:

A modestly larger proportion of Jordan’s public says good relations with the United States are either very (18%) or somewhat (34%) important. This is roughly on a par with China, as has been the case in other recent polls. But the United States has a clear advantage over either Russia or China, or any other foreign nation, in several key subcategories. A plurality (43%) pick the United States as “the country that can best help protect us against our foreign enemies.“ A smaller plurality also see the United States as the outside power that “can best promote human rights and democracy in our country” (37%). [emphasis added]

Not only does Jordan rely on the US for economic aid, the country also values its good relations with the US and sees it as an ally that can help Jordan against its enemies in the Middle East — which is more than can be said for the Gulf Arab states that feel abandoned by the US.

Instead of platitudes about “close friendship and enduring partnership,” it is time for the US to insist that King Abdullah II stop shielding this murderer of Americans.

And it is time for the US to use the means at its disposal to make the extradition happen.