Last night a breath of fresh air blew into Jerusalem with the Subcommittee for National Security of the House Oversight Committee. This official congressional delegation, chaired by Florida Congressman Ron DeSantis, came to Israel for just 24 hours to explore the feasibility of moving the American embassy to Jerusalem. After looking at various sites that have been proposed for this purpose and speaking with PM Netanyahu and other Israeli government figures, the press was briefed on this fact-finding visit.

The visit was not coordinated with President Trump. This delegation sees it as its job to look into the issue of the potential embassy move because the security of embassy personnel is the specific responsibility of this committee. It is DeSantis’ belief that Trump will move the embassy to Jerusalem on Jerusalem Day, the 50th anniversary of the reunification of the city, because it is right around this time that the most recent six month waiver for making the move, signed by former President Barack Obama, expires. DeSantis is fervently optimistic that Trump really will make the move because of the President’s campaign rhetoric, which would be very difficult to walk back.

DeSantis is clearly a lover of Israel. It came through in his every word. When asked if the committee would consider moving the embassy to East as well as to West Jerusalem, the congressman said the committee was exploring all options, as “Our position is that Jerusalem is the capital of Israel.”

In other words: their position is that they make no distinction between East and West Jerusalem. They see Jerusalem as one unified city. As do so many Israelis.

When asked if it might be Israel putting the kibosh on moving the embassy, DeSantis remarked that he had expected that he might encounter this sort of attitude, but was happy to report that PM Netanyahu was unequivocal in his support for moving the embassy. “He wants the embassy moved,” said DeSantis of the Prime Minister.

This writer asked if DeSantis was of the opinion that if the embassy were moved, Europe might follow suit and move its embassies, too. DeSantis believes that some of the European embassies are likely just waiting for the U.S. to make the first move so they can do it, too.

Asked about the issue of recognizing Jerusalem as the capital of Israel, for instance on passports of American citizens born in Jerusalem, DeSantis says his committee intends to send a letter to Rex Tillerson, asking him to revisit the issue, which he says is certainly within Tillerson’s purview.

One reporter asked the congressman if he felt that moving the embassy might destroy any prospects for a negotiated peace settlement. DeSantis replied that in his opinion, the peace process is “dead as a doornail.”

The congressman was equally firm in speaking out against BDS, which he said is absolutely “rooted in antisemitism.”

All in all, it was refreshing to hear the congressman’s staunch support for Israel. He came right out and said it: “I’m not an impartial broker. We’re not impartial. We favor Israel.”

“We only care about the truth,” said DeSantis. 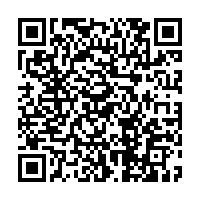