His turnaround came when his Christian wife challenged him to prove his Islamic beliefs that Jews had corrupted the Bible and were “killers of prophets and believers.” It was then that he obtained his first copy of the Bible and realized that he had been fed a pack of lies and that the land of Israel was actually the G-d-given inheritance of the Jewish people.

“When I finally realized the lies and myths I was taught, it became my duty as a righteous person to speak out,” he says. It was not without a heavy price. Shoebat has been branded a traitor by his family and people and forced to go into hiding.


“My family hates me now,” says Shoebat, who spoke to his father last month for the first time in years after his father received a death-threat call.

“The new Palestinian leadership is not the solution either” he declares, in response to the question of whether Arafat’s death could be taken as a sign of hope. “Mahmoud Abbas [Abu Mazen], the prime minister of the PLO, is no different; remember, he wrote his thesis on the notion that the Holocaust is a fabrication.”

“None of my teachers, family members, or friends believe the Holocaust was real,” he adds. “I was taught it was a ploy to bring about the establishment of the Jewish state.”

And how did they explain the newsreel pictures of dead Jews being transported on wheelbarrows from the gas chambers to the crematoria? “They told us, ‘Look at these depraved Jewish actors, how low they can stoop, to pose undressed and naked, just to fabricate the Holocaust.’ ”

Shoebat says the main cause of the Middle East conflict is the Arab countries’ refusal to accept Israel’s right to exist and the enshrining of that intransigence in their school systems. “I never saw Israel on any map in my school,” he recalls, describing the culture he grew up in as “that of the Palestinian Authority, Hamas, or the coffin.”

“Jews,” he says, “have tried to give land for peace. The occupation is in the minds of children who are taught hatred.”

Asked what it is the Palestinians really want, he replies: “They want the destruction of the Jews, period. It’s a religious holy war. It’s in the tradition, the culture. The PA leadership is a chip off the same block as Saddam Hussein, Osama bin Laden, Ahmed Yassin – they are all birds of a feather, they have small differences, but are birds of a feather.”

His message to the Jewish people is “You are G-d’s people. Hold tight and be strong. Do not be weakened by the nations of the world and all those trying to weaken you and take your G-d-given land.”

Israeli Consul for Media and Public Affairs Ido Aharoni has heard of Walid Shoebad but has never met him or heard him speak. “Any Palestinian who describes himself as a former terrorist turned peace maker is a wonderful thing,” he says. “Israel definitely regards such a person and his work as an asset.”

Surely those responsible for Israeli hasbara (public relations) should welcome such a poster child. We at MATCKH would like to clone him and set him loose on a world reluctant to hear the truth. We’ve always maintained that incitement to hate and terror is the root cause of terrorism in Israel, the United States and around the world. Maybe words coming from the mouth of a former terrorist will be better heeded and received. 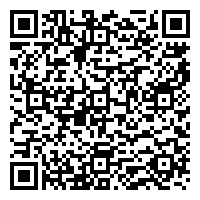