“Spray the suckers. Carpet bomb the whole damn place,” someone is bound to say in every conversation regarding the relentless terror emanating from Gaza toward Israel. After all, we’ve already been accused of carpet bombing Gaza. So why not actually do so?


I’ll tell you why. It’s too brutal. It’s not like us. The thought of bombing innocent civilians is too horrible to contemplate.

But it’s difficult to say that out loud. It makes you look suspicious, or like you’re rooting for the wrong side. So I stay quiet, or refrain from clicking “like” on Facebook comments suggesting Israel carpet bomb Gaza. I let my non “like” express my lack of approval for these sentiments.

Sometimes, I’ll ask the other party to imagine what would happen to Israel were it to contemplate such a move. The world outcry would be enormous. The response, of course, is that the outcry is already enormous. Furthermore, say the wannabe carpet bombers, public sentiment would blow over in no time, in accordance with the fast-changing news cycle.

My gut says otherwise. I think the negative reaction would be huge: beyond anything we’ve seen thus far. Right now, the photos of civilians who suffer at the hands of Israeli “aggression” are faked or don’t show the truth. Imagine if the photos were true!

The negative public opinion would be deafening. The remaining American Jews loyal to Israel would rent their clothes, recant, and admit the JINOs had been right all along. The UN and the EU would demand that justice be done at The Hague. Israelis would fear to travel, branded as international criminals. And Israeli businesses? We’re talking BDS on steroids.

And forget opinion. Carpet bombing would ignite a conflagration, a World War III, God forbid, in which the entire region gangs up on Israel in earnest. (Now if you’re a God-fearing Jew, this is not necessarily a bad thing. The war to end all wars could bring Mashiach, the Messiah. Not that we can go ahead and carpet bomb Gaza on the basis of the assumption that this is how things will play out. That’s not how it works. But if things were to become bad enough, some might take comfort in that idea.)

But when challenged on the idea of carpet bombing Gaza, the inevitable question always follows, “Do you have a better solution?”

Alternatively, folks will get passionate and raise their voices, “How many soldiers and civilians have to die before we get serious?” they will say. “How many crops must be burnt? How many animals killed? And what of our ecosystem?”

These are questions for which no one has answers, least of all this writer, who has a soldier son and children and grandchildren in Netivot, in the South. This is the predicament in which we find ourselves after the Expulsion, Ariel Sharon’s “Disengagement” plan. Sharon threw the Jews out of their homes to take attention away from his sons’ legal issues. He made the 10,000 Jews he expelled from Gaza and Samaria the sacrificial lamb for his personal woes. This is in spite of campaign promises in which he swore he would never give Gaza away—despite citizens’ referendums in which the people overwhelmingly voted against the move.

My belief is that Sharon is roasting on a spit in Hell like a rotisserie chicken for the Expulsion and the resulting situation in which we now find ourselves. It’s like a modern day Noah’s Ark story, where the world that was created in Gaza in the wake of the Jews’ expulsion is just too ugly, too rotten with terror and evil to exist, and so it must be destroyed in toto. Except that God promised He would never do that again: would never destroy a world.

And so it is up to Israel, if it is to be done at all.

But we simply can’t.

So we’re caught between a rock and the hard place of innocent civilian pawns and public opinion. A purgatory, if you will, to Sharon’s Hell.

The only thing we can do, for now, is come down much harder on those who threaten the embattled Jewish State. Let’s hope that the IDF plans to do exactly that. Israel must stop playing chicken with Hamas. We need to throw some fear into the terrorists, in spite of the cost to civilians. We have to end the situation whereby Israel issues warnings as weak threats: “Stop starting fires and shooting rockets or we’ll wage war.”

The warnings only signal Hamas to slow down its terror activity just enough to make Israel stand down.

Until it begins again. 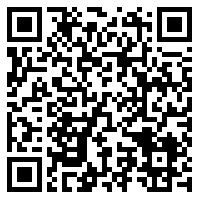