In March of this year, I traveled with over 30 Orthodox Jewish community leaders on the Am Echad mission to Israel. Our delegation met with Prime Minister Benjamin Netanyahu, President Ruby Rivlin, and Cabinet and Knesset members to give voice to the Orthodox community’s viewpoints.

We argued that the strongest base of support for Israel currently comes from Orthodox Jews in America, who feel a sense of responsibility toward their brethren in their ancestral homeland. Many on the liberal end of the Jewish spectrum, in contrast, feel compelled by party politics to support the Palestinians and vocally criticize Israel.


Most of the government officials we spoke with knew about Orthodoxy’s growth and the declining numbers of non-Orthodox Jews. What was surprising, though, was the vehemence with which they noted the chutzpah of some Reform leaders who demand a voice at the Western Wall while calling that same wall “occupied territory.”

Reform chutzpah was once again in display earlier this month at the commencement ceremony of the Hebrew Union College-Institute of Religion in Los Angeles where novelist Michael Chabon gave the commencement address. Chabon’s hostility towards Israel is well-known. He is the co-author of Kingdom of Olives and Ash: Writers Confront the Occupation and collaborates with Breaking the Silence, an anti-Israel organization.

Nonetheless, HUC Interim President Rabbi David Ellenson introduced Chabon as a “moral voice.” He praised Chabon’s book, which he said deals with “50 years of Israeli occupation in Palestine.” He also pointed out the current importance of the book due to the relocation of the U.S. Embassy to Jerusalem.

With that introduction, Chabon took the stage and began his speech by condemning the security barrier Israel built to prevent attacks by terrorists. He continued by attacking Judaism’s most sacred traditions and beliefs. He dismissed the Exodus from Egypt as an ancient lie that has allowed the Jewish people to “manufacture out of whole cloth a tradition of bitterness.”

He went on to state that intermarriage is “the source of all human greatness” while “endogamous marriage is a ghetto of two.” He condemned Judaism, in particular, by saying that “any religion that relies on compulsory endogamy to survive has…ceased to make the case for its continued validity in the everyday lives of human beings.”

This speech was given to some of the future leaders of Reform Jewry and in the presence of many current Reform leaders. What was the audience’s response? Aside from a single student who walked out in disgust, Chabon’s speech received thunderous applause – applause for a speaker who attacked the tenets of the very religion these newly-ordained rabbis plan on sharing with their future communities. Mind-boggling.

Several articles have been written denouncing Chabon’s goal to delegitimize boundaries of any kind. For me, however, his speech, and the support it received, was a reminder of the chutzpah the Israeli officials has spoken about. The chutzpah of a movement that vocally supports our enemies in their fight against the one and only Jewish state. A movement that proudly brings in Chabon as a role model of morality to its future leaders. A movement whose leaders applaud intermarriage and criticism of Jews who marry fellow Jews.

And a movement that, despite all the above, demands a voice in a country whose security it doesn’t support and regarding a religion whose tenets it doesn’t value. 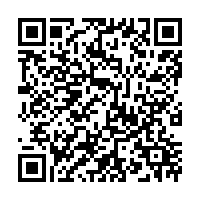