What is our duty to those confined in places where the coronavirus crisis is a threat?  Efforts to protect residents of facilities that serve the elderly have gained a great deal of attention. Yet the inhabitants of prisons may be in as much danger. Still, the question of what we should do about this problem says a great deal about the willingness of some to let their ideology overcome common sense. It also illustrates just how little some who claim the title of “human-rights activists” or advocates for “peace” value the lives of others, including their fellow Jews.


There’s little doubt that once the virus is let loose on those locked up in jails, as well as those who guard them, the results could be bad. That’s why some American states and cities where the disease has become a particularly potent threat, such as New York and New Jersey, have released large numbers of inmates in order to allow elderly prisoners who are most at risk to evade a potential deathtrap. Others, including those who were sentenced for non-violent offenses or whose sentences were nearly finished, have been freed in order to relieve overcrowding.

This has led to a spirited debate about the moral dilemma involved in maintaining penal institutions during a pandemic. The government has an obligation not to let a prison term become a death sentence. But it is equally obligated not to make decisions that endanger other citizens, who may be more likely to be victims should this policy lead to a jailbreak crime wave. The fact that New York City has released hundreds of people accused of violent crimes, in part because of the virus and also due to a recently passed dangerous “bail reform” law, has led to understandable fears about life in quarantine becoming more like a dystopian post-apocalyptic scenario than an orderly attempt to reduce deaths from a deadly disease.

At a time when the ranks of the police and first responders have been thinned by the disease, and those who are still healthy are preoccupied with dealing with the problems created by the pandemic, any mass release of prisoners has the potential to create a real crime problem. While crime rates are reportedly down, that may be more a measure of lower arrest rates than a decline in felonious behavior.

The debate in New York has exposed the fact some of those advocating such prison releases, including the American Civil Liberties Union, are motivated by a belief that the entire criminal justice system is unjust and even the most guilty prisoners can deserve a pass. But as risible as that position might be, when it is transposed to Israel, such efforts tell us something even more outrageous. Those clamoring for prison releases there are not so much driven by concern for the health of prisoners, but by a belief that captured terrorists don’t deserve punishment.

That is the position of Jewish Voice for Peace, a left-wing group whose real agenda is the eradication of the Jewish state. JVP organized a Zoom rally and “Twitterstorm” this week with some leftist allies whose goal is to “free prisoners from Rikers Island [New York] to Palestine.”

Of course, by prisoners in “Palestine,” JVP doesn’t mean a demand for Hamas to release a peace activist who hasn’t been seen alive since he participated in a Zoom conversation aimed at promoting coexistence with Israel. Nor are they interested in freeing those detained by the Palestinian Authority for questioning the despotic rule of the Fatah Party. What they want is to free every Palestinian being held in Israeli jails, including those terrorists with blood on their hands.

This illustrates two things about JVP and its liberal enablers, like writer Peter Beinart, who deny the inherently anti-Semitic nature of its efforts.

JVP’s apologists have tried to assert that it is merely neutral about Zionism and Israel’s right to exist. In this way, it has sought to gain access to mainstream Jewish forums and community-relations councils. But that big lie has been exploded by the anti-Semitic blood libel at the core of its “Deadly Exchange” campaign, in which it has sought to blame pro-Israel Jews for police shootings of African-Americans in U.S. cities.

JVP also considers Rep. Rashida Tlaib (D-Mich.) so cherished an ally that it devoted its online Passover seder this year to a virtual rally in support of a woman who is not only an open supporter of BDS, but an unapologetic advocate of the destruction of the State of Israel.

JVP’s willingness to use the pandemic as an excuse to demand the release of terrorists who have murdered Israeli and American men, women and children—and who will surely do so again if given the chance—is more evidence of its lack of a moral compass.

Indeed, the participants in this rally for freeing prisoners includes former CNN commentator and academic Marc Lamont Hill, best known for his “Palestine from the river to the sea” speech at the United Nations; Aarab Barghouti, the son of Marwan Barghouti, the Fatah figure currently serving several life terms in an Israeli prison for murdering civilians; as well as other Palestinian activists who actively promote violence against Israelis and Jews.

This should be remembered the next time a rabbinic supporter or a college chapter of the group tries to pose as critics of Israel’s government and its policies, as opposed to the Jewish anti-Semites they are. The same applies when left-wing political activists who make common cause with JVP seek to gain input on the Democratic Party’s national platform this year.

Prison officials should do what they can to mitigate the effect of the virus on their charges, even if social distancing isn’t always possible there. Releases of those who don’t pose a threat to society should also be considered. However, those who advocate the release of violent thugs, including Palestinian-terrorist murderers, under the guise of coronavirus compassion should never be allowed to get away with posing as supporters of human rights. 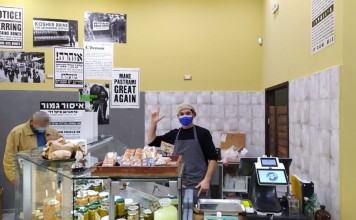