Home InDepth Op-Eds Years Before Trump’s Abraham Accord We Almost Had Obama’s ‘Ishmael’ Accord
Share on Facebook
Tweet on Twitter
Photo Credit: Asher Schwartz
Before the Trump administration changed the rules for what peace in the Middle East could look like, Obama also tried his hand at opening ties with problematic countries based on the invitation he made in his 2009 inaugural address that “we will extend a hand if you are willing to unclench your fist.” This led to improving relations with Myanmar in 2012 and Cuba in 2014.
Unlike the Abraham Accord, there was not a lot of excitement and fanfare, and not much in the way of a ripple effect. But Obama did consider something more substantial in the Middle East during his last year in office.
In April 2016, he tried to play broker, but not between Israel and the Arab world. Instead, Obama tried to negotiate peace between Saudi Arabia and Iran:

The White House is pinning its hopes for a more stable Middle East in years to come on the uncertain prospect that it can encourage a working relationship—what Mr. Obama has called a “cold peace”—between Saudi Arabia and Iran

…“You need a different kind of relationship between the Gulf countries and Iran—one that’s less prone to proxy conflicts—and that’s something that would be good for the region as a whole,” the official said. “Promoting that kind of dialogue is something the president will want to speak to the leaders about.”

All you need do is substitute Israel for Iran and you have the basic outline for the Abraham Accords, based on the goal of a “warm peace” between Israel and those same Gulf states — and other Arab states as well. But by focusing on Iran instead, not even a cold peace was achieved.
Obama’s failure to bring Iran and the Saudi’s is not surprising.
After all:
The Saudis are Sunni, Iran is Shia.
The Saudis are Arabs, Iran is Persian.
(The fact that Iran is a global sponsor of terrorism and working on making a nuclear bomb didn’t help.)
Don’t underestimate the rift between Sunnis and Shiites.
In his book, The Closed Circle, David Pryce-Jones writes about the turmoil following the death of Mohammad, whose only family heir was his daughter, Fatima. There was no agreement on how Mohammad’s successor was to be chosen:

Leadership of the community might pass through her and her descent, or through the Prophet’s companions who were best qualified. A majority, known as Sunni, preferred election. A minority, known as Shia, preferred the principle of heredity, devolving through Ali, the cousin and husband of the Prophet’s daughter, and those descendants of his specifically designated for the succession by their own immediate predecessor. Disputed authority made for the fragmentation of Islam. Three of Muhammad’s four immediate successors [including Mohammad’s son-in-law, Ali], known as caliphs, were murdered. Turning upon legitimacy, the quarrel between Sunni and Shia became irreconcilable. [emphasis added; p. 28]

This fighting among Muslims has never stopped. The situation in Syria is just one example of many of how divided the Arab/Muslim world is against itself.
But in addition to the Sunni-Shiite rift, how does the Arab-Persian rift play out?
Back in June 2019, Mordechai Kedar — who served for 25 years in IDF military intelligence — gave a talk to
EMET, the Endowment for Middle East Truth on the Middle East. 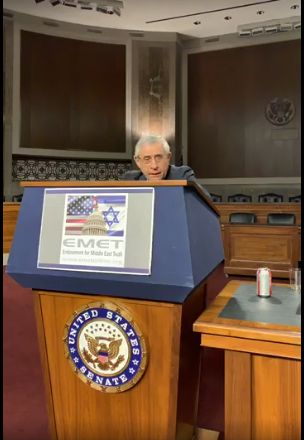 One of the topics Kedar touched upon was the roots behind the hatred between the Saudis and the Iranians (starts at 36:05). He traces this tension back to the 7th century, when the Arabs were spreading Islam from the area that is today Saudi Arabia — starting with Syria, Lebanon and what is today Israel, spreading out to the east (to Iraq, Iran, Pakistan and Afghanistan) and to the West (Egypt, Libya, Tunisia, Algeria Morocco and Northern  Africa) and then up north (Spain). In the year 636CE, the Arabs defeated the Persia army, despite the larger Persian army. Their forces were worn down both by wars with Byzantine as well as by moral and political corruption within.
But the differences between the two armies was more than a matter of size. Kedar points out the erudition of the Persians, many of whom were adept at mathematics, chemistry, physics and astronomy, having made great contributions in these areas — but because of their corruption, they ended up being defeated by the Arabs, who in those days were illiterate. Following their defeat, many of the Persians were sold into slavery, a degrading and humiliating procedure –all the more so for academics being sold into slavery.
The Persian slaves freely converted to Islam, knowing this would get them out of slavery — only to find that the Arabs put taxes on them, taxes they could not pay so that they were forced instead to work for the Arabs.
And so they were cheated a second time.

As Kedar puts it:

Till this very day, the Persians have not forgotten and did not forgive what the Arabs did to them. And this underlies the enmity between the Persians and the Saudis.

The Saudis are the descendants of those who did this to the Persians.


Mordechai Kedar also spoke about this in Hebrew at BESA in March of that same year, starting at about 15:45 (video will automatically start there.)

Jews are not the only ones with long memories.

Considering the nature of such enmity, it is no wonder that Obama’s attempt to bring the Iranians and the Saudis together failed.
But by the same token, this hatred casts doubt on the wisdom of Obama’s Iran Deal as a whole, on the direction it was taking prior to Trump taking office and on Biden’s declared intention to resurrect the deal.
If anything, this background verifies the need for a Middle East coalition against Iran.
Advertisement