Rabbi Akiva Eiger’s brother, Rabbi Bunim, sent him the following question: Is it permitted to draw up a deed of sale before Shabbos with a stipulation that the transaction take effect on Shabbos?

A similar question was raised regarding automatic vending machines owned by Jews and patronized by gentiles on Shabbos. In essence, both questions revolve around the same issue: Are only business acts prohibited on Shabbos? Or are transactions that occur automatically on Shabbos also prohibited?

Melachos That Began on Erev Shabbos

The Gemara states that it’s usually permitted to begin a melacha on erev Shabbos that will be completed on Shabbos. For example, you can soak fabric in dye on erev Shabbos and allow it to continue soaking on Shabbos. You can also set traps on erev Shabbos although they may spring on prey on Shabbos (Shabbos 18a). A person is forbidden to work on Shabbos, but there is no prohibition against letting one’s possessions work.

The Avnei Nezer (Orach Chayim 51) argues, however, that business transactions might be different. When a fabric is soaking in dye, it needs no further action from the owner. Even if the owner would suddenly pass away, G-d forbid, the fabric would continue absorbing the color. The person is therefore entirely disassociated from the continued progress of the melacha and that’s why one may begin the melacha on erev Shabbos.

However, a business transaction contains two elements, one of which actually takes place on Shabbos. The two elements are: the agreement and the actual transfer of ownership. Although the agreement was reached on erev Shabbos, the transfer of ownership does not take place until Shabbos. If the person would die in the interim, the transaction would be null and void. Thus, he is still involved in the sale even if he doesn’t do anything to carry it out.

So perhaps a business deal that starts on erev Shabbos would be prohibited. The answer seems to depend on whether concluding a sale is included in the prohibition of conducting business on Shabbos or just starting one.

The Maharam Shick (Orach Chayim 131) rules that it’s permitted to arrange a deal that will conclude on Shabbos while Rabbi Akiva Eiger (159) postulates that it’s forbidden.

Nevertheless, our Gemara states that one may stipulate on erev Shabbos that certain fruit should become terumah and ma’aser once Shabbos begins. It’s permitted for the tithing to take effect on Shabbos provided that all the necessary deeds were completed on erev Shabbos. Presumably, then, the same should be true about conducting a business transaction. It should be permitted for the transaction to take effect on Shabbos provided that the deal was completed on erev Shabbos.

Two Halves of the Same Person

The Avnei Nezer (ibid.) rejects this proof, noting that as a general rule, when two people perform a melacha – one beginning it and one concluding it – they are both exempt from punishment. If a single person begins a melacha on erev Shabbos and concludes it on Shabbos, he is also exempt from punishment for the same reason: He only performed half the melacha on Shabbos.

Even though he’s not punished, however, he may not perform this half melacha l’chatchila. It is permitted, though, to lift up an object on erev Shabbos and carry it out to a karmelis on Shabbos. Why? Because carrying in a karmelis is only rabbinically forbidden.

Similarly, preparing tithes for separation is half a rabbinic prohibition and that’s why one may initiate tithing on erev Shabbos and allow it to be completed on Shabbos.

It cannot be compared to conducting business, which is a biblical prohibition based on a pasuk from Tanach: “If your refrain on Shabbos…from pursuing your interests” (Yeshayahu 58; see Rashi, Beiza 37a). Therefore, one cannot prove that starting a business transaction to be completed on Shabbos is permitted based on the halacha that one may begin tithing on erev Shabbos with the process to be completed on Shabbos. 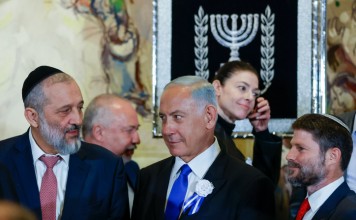