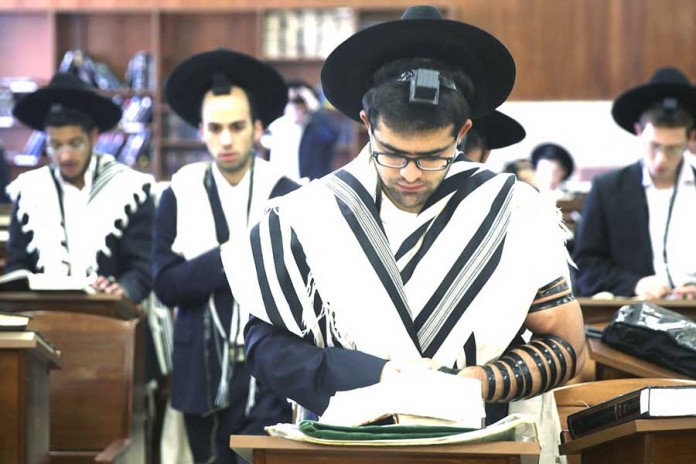 The three steps forward are intended to be reminiscent of Moshe, who approached G-d in prayer on Mount Sinai after passing through three different barriers: the “darkness,” the “cloud,” and the “mist.”9 It also recalls the Jewish people distancing themselves from Mount Sinai three milin (miles) after hearing the awesome and frightening voice of G-d Himself, and later returning to their place.10 It is also suggested that the three steps represent the three times in the Torah that the word vayigash is used to refer to prayer, once by Avraham, once by Yehuda, and once by Eliyahu HaNavi.11 Finally, at the end of the ramp leading to the Altar in the Beit HaMikdash, there were three steps that the Kohen would have to ascend to actually reach the Altar in order to offer the daily sacrifices. He would then descend these three steps on his way down. Therefore, we take three steps before and after reciting Shemoneh Esrei, as this prayer serves in place of the daily sacrifices that were offered upon the Altar.12

Although it is true that virtually no interruptions are permitted between ga’al Yisrael and the beginning of Shemoneh Esrei, these three steps are deemed to be a component of the prayer, and as such, are not considered a hefsek.13 One should only begin saying the words “Adonai sefatai tiftach…” after one has completed the three steps forward.14 If taking three steps forward will bring one uncomfortably close to another worshipper who is already in the midst of Shemoneh Esrei, or otherwise disturb others, one may forgo the three steps.15

One should take the first step back using one’s left foot (generally the weaker foot) as if to show one’s hesitation in taking leave of G-d.20 These steps should not be exceptionally large – just the distance from one end of the foot to the other.21 In the event that one is unable to take three steps backward, one may move three steps to the side or even diagonally instead.22 In a situation where there is simply no room to take three steps backward, one may suffice with three tiny symbolic steps.23 One who is confined to a wheelchair should roll himself backwards at the conclusion of Shemoneh Esrei the approximate distance of three steps.24

There does not seem to be any source for the practice of some individuals to rise upon their toes, as is done when reciting Kedusha, after taking three steps forward at the end of Shemoneh Esrei.32