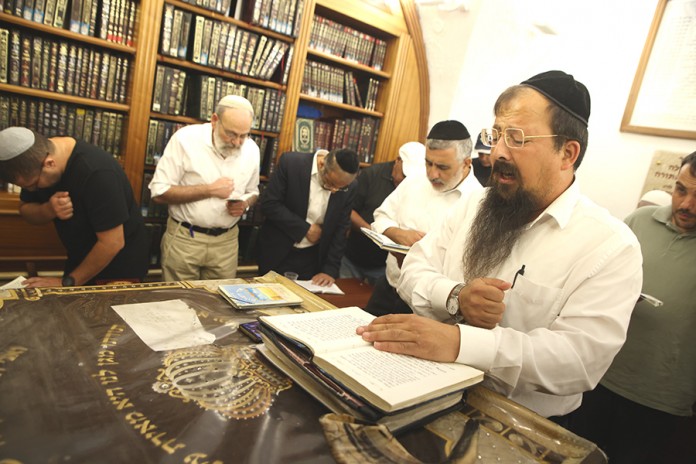 There is a widespread custom in many congregations that the one who leads the selichot prayers also leads the remaining prayer services that day.1 This is based on the principle that “one who has begun a mitzvah – we tell him to finish it!”2 This practice is intended to encourage people to engage in the performance of mitzvot, especially communal ones.3 Indeed, the one who leads selichot takes priority over anyone else in leading the day’s remaining services, including mourners who would otherwise take priority.4 A further reason cited for this custom is that it was once customary for the one who leads the selichot prayers to fast that day. Since it is always more auspicious for an individual who is fasting and repenting to lead services, it was decided that he should be the one to lead the remaining prayer services of the day as well.5

It is also suggested that the reason for this custom is to serve as a form of compensation. This is based on the mistaken belief that the task of leading the selichot prayers is one of the more inferior synagogue honors that one can receive. As such, the one who led the selichot was offered the privilege of leading all the other services that day in order to make up for any insult that he might have felt for having been assigned to lead the selichot prayers.6 This is reminiscent as well of another ancient custom. It was once customary in many communities for the one given the Maftir Aliyah to also be honored with leading Mussaf. This was considered to be a form of appeasement for having received an aliyah that was viewed by many as an inferior one.7 Finally, it is also noted that the one who leads selichot is required to go through the trouble of waking up earlier than everyone else. The privilege of leading the remaining services of the day was his reward and appeasement for having lost sleep.8

There is a difference of opinion whether or not the privilege of leading the remaining services of the day extends to the Ma’ariv service, as well. As Ma’ariv essentially inaugurates a new day on the Jewish calendar, some authorities feel that there is no reason it should be included. Nevertheless, there are other authorities who argue that Ma’ariv should be included in these benefits as well. This is because the daily evening service corresponds to the burning of any remains that might have been left over from the day’s sacrifices in the Beit HaMikdash.9 As such, a connection can certainly be drawn between Ma’ariv and the services that preceded it earlier in the day. So too, there is a view that the one who will be leading the selichot services in the morning should be honored with leading Ma’ariv the evening before as well.10

A growing number of authorities rule that this custom is no longer relevant nowadays and that the one who leads selichot deserves no additional honors.11 This is because it is noted that the role and responsibility of the chazzan in ancient times was to personally discharge the recitation of selichot (and all the daily prayers) on behalf of the entire congregation. In order to accomplish this, the chazzan would read every single word out loud, slowly and clearly, so that everyone would be able to follow along. In our day, however, the chazzan’s role is much different. Today, everyone essentially prays on their own and therefore the chazzan merely serves to ensure that the congregation proceeds together in unison at a comfortable pace. This is basically accomplished by simply reading the first and last lines of every paragraph out loud. As such, the job of leading selichot today is much less demanding than it once was and therefore does not warrant any additional honors.12