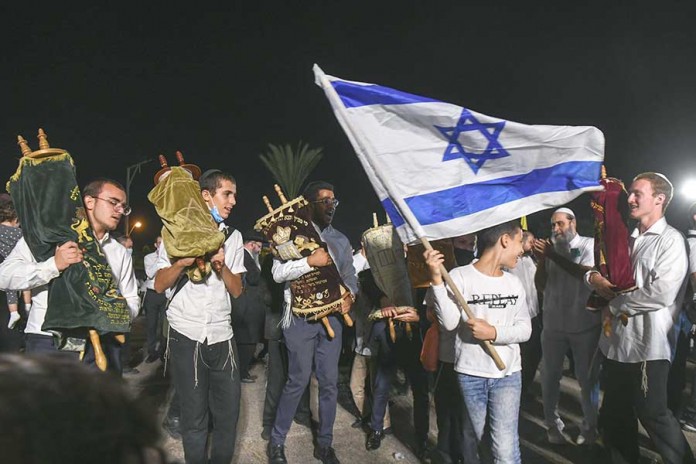 The evolution of Simchat Torah as part of the Shemini Atzeret celebrations originated in Babylon and was not even observed in Eretz Yisrael until the end of the Gaonic period.1 For Babylonian Jewry, Simchat Torah celebrated the completion of the annual Torah-reading cycle. As is the custom today, the Torah was divided up into 54 separate parshiot, with a different parsha (and sometimes two) being read every Shabbat, thereby completing the entire Torah each year.

In Eretz Yisrael, the Torah was only completed every three or three-and-a-half years. Simchat Torah, therefore, did not have a set date. Rather, celebrations were simply held whenever the Torah was completed. Originally, Simchat Torah was merely celebrated with a festive meal in honor of the Torah’s completion. Even the universal custom to immediately begin reading the Torah anew once it is concluded only arrived much later. Simchat Torah is the only holiday whose Torah reading has no connection to its biblical roots (in this case, Shemini Atzeret).

The custom of dancing hakafot is first recorded as occurring in Tzfat in the late sixteenth century. Although universal practice today is to perform seven hakafot, original customs included only one, three, or six hakafot. The hakafot, dancing around the bima with the Torah scrolls, was adapted from the Hoshana Rabba custom of circling the bima seven times with one’s lulav and etrog. Hakafot are generally done on Simchat Torah night and then repeated the next morning, though there are congregations in which hakafot are conducted again at Mincha. In some communities, particularly in Israel, there is an additional hakafot ceremony that takes place the night following the conclusion of the holiday.

The individual who is honored with the final aliya of the Torah is referred to as the Chatan Torah, “groom of the Torah.” It is interesting to note that this designation is actually a corruption of the original name for this aliya, which was Chatam Torah, “one who seals or concludes the Torah.”

There are several intriguing customs that different communities of the Diaspora observed on Simchat Torah. For example, there was once a custom to dance the hakafot while holding candles, symbolizing the verse ki ner mitzvah v’Torah or (the candle represents the mitzvah and the Torah is the light). In Worms, the Simchat Torah hakafot used to take place around bonfires. Indeed, fun and games involving fire, including firecrackers, were very prominent in many Ashkenazi communities.

Of questionable halachic practice was the custom in some communities to hire non-Jews to play musical instruments as part of the Simchat Torah celebrations. It might just be that today’s permissive approach to dancing on Shabbat, seemingly forbidden by normative halacha, evolved due to its adaptation from the Simchat Torah festivities. Indeed, it seems that dancing on Shabbat or Yom Tov was unheard of until the canonization of Simchat Torah. The Simchat Torah mid-service Kiddush is an ancient Ashkenazi practice. That is why the Birkat Kohanim is performed at Shacharit and not at Mussaf when it is usually performed. This is due to the concern that the Kohanim might become intoxicated at the Kiddush. All Simchat Torah customs are holy and each community should be sure to observe its customs. As the Rema writes: “Each community follows its own custom.”

Women have also had important and contributing roles in the Simchat Torah festivities. It was often the women who would decorate the Torah scrolls in honor of Simchat Torah. There was also once a custom for women to auction off among themselves the opportunity to throw candies on the men receiving aliyot as well as the privilege of sweeping the floors of the synagogue throughout the year. Wives of the Chatanei Torah were referred to as the Kallot Torah. There were also communities in which the women were permitted to enter the men’s section to observe the Simchat Torah festivities. It seems that it was once a universal custom to offer women the opportunity to kiss the Torah on Simchat Torah.

Of course, children feature prominently in the Simchat Torah festivities as well. The custom of calling every child for an aliya has become universal, and in some communities they would even read their aliyot themselves. Originally, it was only children above the age of six or seven who would receive aliyot. In some communities, children are called to the Torah individually while in others they are called up together in one big group aliya. Some communities do both.

A prominent Simchat Torah feature is the flags that are distributed to children to wave and strut. It is explained that the flags are intended to recall how each tribe was led and represented by its flag throughout the wanderings in the desert. The flags, which are decorated with pictures of the Torah, symbolize that the Torah is our weapon in spiritual warfare. There are usually other pictures and designs printed on the Simchat Torah flags, each representing a different theme in mitzvah observance.

It is also customary for the adults to randomly throw candies and even fruit in the synagogue for the children to scramble for them and eagerly await their launch. This was likely an effort to keep the children awake and interested throughout the day’s festivities. It may just be that the common custom to dance with children upon one’s shoulders is meant to be reminiscent of the mitzvah of re’iya, which is the mitzvah to appear in Jerusalem at the Beit HaMikdash on the Shalosh Regalim (the three festivals: Pesach, Shavuot, and Sukkot). Similarly, it is taught that the custom of including women and children in the Simchat Torah festivities is intended to recall the mitzvah of hakhel, when the entire nation would come together as one every seven years to hear the Torah read. In some communities, children would burn the schach that had been used for Sukkot.

There is a widespread custom to read from the Torah on the night of Simchat Torah. Historically, however, many congregations did not do so in deference to the view that a public Torah reading should never take place at night. In what was seen as a compromise approach, some congregations would indeed read from the Torah, but omit the opening and closing blessings of each aliya. In some communities, children would be called to the Torah at the nighttime reading, as well. Congregations that do read the Torah at night read either three or five aliyot from V’zot Haberacha.