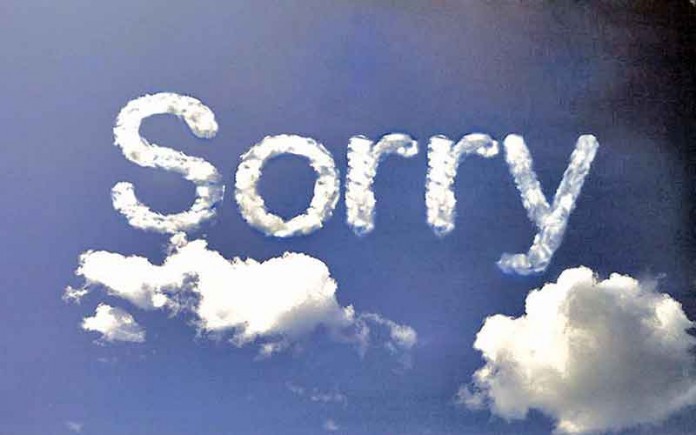 Forty years. That’s a long time to wander in the wilderness. Imagine it taking that long before two brothers reconcile? In her June 29, 2013 article on Aish.com, Debbie Gutfreund wrote about forgiveness and about how her grandfather and great-uncle, for a transgression unknown to the rest of the family, did not speak for over 40 years. Reconciliation finally came, but so very late. And at what cost?

We are human. We feel vulnerable. We get angry. We make mistakes. Some trivial. Some significant. Some deeply hurtful. Still, it is almost never the mistake itself which damages a relationship. It is the failure to honestly acknowledge and apologize for it. To make amends.

Why is it so hard to face our parents, our spouses, our friends, and G-d and utter those words? We know we have fallen short. We know the one we’ve wronged deserves our apology. Yet, we delay. And with each passing second, minute, day and month, the emotional callous thickens and those words become harder to say.

And sometimes “tomorrow” never comes. Sometimes it is too late, but it is never “too soon,” never too early to own up to one’s failings and errors.

We begin reciting Selichot this motzaei Shabbat (Sefardim began Selichot on Rosh Chodesh Elul). What’s the rush? Isn’t the awesome period between Rosh Hashanah and Yom Kippur enough for facing our shortcomings, to owning up to our weaknesses and asking G-d for mercy and compassion? Ten days of demanding introspection. Isn’t that enough?

The short answer is No.

The sooner we are able to apologize, the more at peace we are with ourselves. An apology lightens one’s conscience and allows one to be at peace. The psychic weight of our wrongs grows with each passing day with time deadening our feelings. Neither pride nor willful ignorance can relieve the burden. There is only one way to ease it. “I’m sorry.”

The highlight of the very first Selichos service is undoubtedly the pizmon with its beautiful refrain – Lishmoa el ha’rina v’el ha’tefila (O that You listen to [their] song and to [their] prayer!). The pizmon opens by announcing that we are coming before Hashem as the day of rest departs [b’motzaei menucah], asking of Him that He “…bend Your ear from on high, Who sits to hear Israel praise Him.”

The pizmon’s author uses the word “kidamnucha” to ask G-d to “tune in to” our pleas and prayers. Kidamnucha is related to the word mukdam (early). We declare before G-d that now that Shabbos has gone out, we are rushing in; we are arriving early before Rosh Hashanah, to tell You we are sorry, that we fell short and we need You to forgive and be merciful.

We want G-d to know that we know it’s never too early to say I’m sorry; that we know that we have the Ten Days of Awe, but we’re here now, mukdam, to ask G-d to listen to our prayers and song. We know the sooner we start the more successful we will be. To delay is to fall short. Time will defeat us. Whatever needs to be done, must be done now. Procrastination only leads to failure.

When my children were younger, they laughed at Abba for always insisting on arriving early. Perhaps subconsciously I wanted to convey that kidamnucha is the way to go! Start early, finish successfully. Start late… who knows?

We begin Selichos mukdam. The sooner we ask Hashem for forgiveness, the sooner we’ll know the grace of our burdens lifted.

Rabbi Yissocher Frand cites the Izbitzer Rebbe as having illuminated this truth by drawing from one of the saddest episodes in all Tanach – the tragi-drama that plays out in four harrowing chapters of Shmuel II (15-19). In them, Avsalom sought to usurp his father, King David’s, throne, perhaps even kill him. King David fled Jerusalem with his family and entourage, having to escape his own son!

Pouring salt into this wound, Shimei ben Gerah tore into King David with insults, assuming Kind David’s rule was finished. Having a personal grudge against Dovid HaMelech, he mercilessly cursed the king on the run, while pelting him with stones.

But King David did return to Jerusalem and did regain his throne. Imagine then the fear and trembling of those who had opposed him, particularly Shimei ben Gerah and his men! According to halacha, these were now deserving of death for being rebelling against the king.

What did Shimei ben Gerah do? “Shimei son of Gerah, the Benjamite who was from Bahurim, hastened and went down with the men of Yehudah to greet King David…” He reached the King and told him, “…For your servant knows that I have sinned, and here I have come today, first among all the House of Joseph, to come down and greet my master the king.”

Thousands needed to ask David for forgiveness, but Shimei emphasized that he was among the very first; he was mukdam. Shimei knows that he sinned and that he deserves to lose his life for it. He confesses to King David. He is determined to apologize and makes clear he is not waiting in line to do so!

The Izbitzer insightfully explains that this is what we do showing up early – kidamnucha – before everyone gets to G-d on Rosh Hashanah and certainly by Yom Kippur. We want to be there first, at the head of the line, to ask for mercy and forgiveness. Yes, G-d is merciful. Yes, we can wait until Rosh Hashanah, even until Yom Kippur. We can procrastinate. But we are wise to remember, as Rabbi Tarfon does in another context, “… the day is short…”

The day is short. Our time is not guaranteed. One day can turn to years in the blink of an eye and then it is too late. Let us be mukdam. Let us seize the moment. Let us relieve our burden of guilt while we can. The benefit of doing so is great.

Remember Shimei ben Gerah. He had been so deep in sin that he was deserving of death. Understanding and acknowledging the grievous nature of his sin, he rushed to make amends early (mukdam); indeed, he rushed to get there first. His determination to find forgiveness paid off. He was spared. Neither King David nor his son, King Solomon, had him killed.

Was his salvation the grace of the kings or of his kidamnucha? Or both?

B’motzaei menucha, kidamnucha techila – “As the day of rest departs, we come before You first…”

We come before Him after our Shabbos rest, relaxation and tranquility; we are at peace, focused on our ability to get to Him first. We want to be relieved of the burden of our iniquities, relieved of our guilt. We do not want to stand in line. We want to be first. El Melech – we acknowledge You as King without doubt or reservations. We know that You, “…sit on the throne of mercy…pardons the iniquities of His people…increasingly grants pardon to careless sinners…”

Forgive us, we came early.

One more day waiting is like forty years, wandering.