When anyone asked “why” in her presence, my bubby, Rebbitzin Fruma (Frances) Kohn, would repeat the quip, “Why is a crooked letter!” However, with her European-accented English it would come across as “Vy is a crooked letter.” The irony and G-d’s humor was that for the last decade of her life, Vy was the name of Bubby’s Latin-American caretaker. Every time I went to visit Bubby and she called Vy I had to restrain myself from repeating the quote I heard from her so often.

In retrospect I have come to realize that the humorous quote is actually quite profound. My Bubby was part of a generation who did not have the luxury and could not afford to ask why (or vy).


Bubby grew up in a small Polish village called Tarnogrod. She recounted that she had a wonderful childhood, and her family was somewhat wealthy, which was recognizable by the fact that they were one of the few homes in their town to have indoor plumbing. But then the dark clouds of World War Two rolled in. Her family escaped the Nazi massacre of their village but eventually were deported to Siberia by the Russians. The only one to avoid that fate was her one married sister who would send care packages to the rest of the family. That ended when the Nazis killed her sister, brother-in-law, and their infant child.

After 18 months in Siberia the family was released. They traveled southwest and ended up in Samarkand in Uzbekistan. There Bubby met my Zeide, married and had their first child, my Uncle Shmuel. When the war finally ended, they ended up in Paris and from there they came to the United States.

When she would recount some of her experiences from those dark and painful years, Bubby would note that she sometimes felt like she was talking about someone else’s life. It was hard to imagine that she had endured and survived those terrible experiences.

On one occasion when I was in graduate school pursuing my master’s in social work, I was paired up with fellow students to discuss our family background and how and when our ancestors arrived in America. I was speaking about my Bubby and Zeide and referred to their coming to America after the war. One student asked me, “You mentioned the war. Would that be the Civil War, Korea, or Vietnam?” I apologized for my lack of clarity and explained that among Jews we take it for granted that when anyone refers to “the war” it’s referring to the Holocaust and World War II, when our people were targeted for merciless and baseless genocide.

I read an article a few years ago in which the Novominsker Rebbe discussed the need to teach about the Holocaust from a Torah perspective in our yeshivos. The rebbe noted that for the first decades after the war those lessons were not included in the yeshiva curriculum because it was too raw and too painful. At that point, the mission of the Torah world was to rise from the ashes and to look ahead with confidence at the formidable task of rebuilding and thriving. They could not afford to dwell on the unbearable pain of what had occurred.

However, as the years and decades wore on, and the number of living survivors continues to wane, we have an obligation to preserve the dark memories of what happened. We have to give our children a framework and perspective to understand the judgment of Hashem and to remember the calamitous events that occurred. We must speak of the heroism of the faithful and the uncanny mesiras nefesh to preserve mitzvos under the worst of circumstances. Those lessons must be preserved now before the opportunity is lost. Years ago, we could not afford to speak about it. But now we cannot afford not to.

A month ago, on Lag Ba’Omer, we heard about the terrible tragedy that occurred in Meron with the tragic death of 45 precious Jews. One of those 45 was Donny Morris. Anyone who has attended Camp Dora Golding during the last few summers is well acquainted with Donny’s radiant smile, easygoing personality, and excitement for davening and Torah learning.

At her son’s funeral Donny’s mother, Mirlana Morris, eulogized him with tears in her eyes: “I have so many questions, but so few answers.” She then added, “But what I know for sure is that you were loved by so many. The impact you had on hundreds is remarkable. Daddy and I couldn’t be prouder to call you our son.”

Her painful yet powerful words contain what has often been the cry of our people. So many questions and so few answers. Yet, we are so proud of our mission and accomplishments, and know that our impact has changed the world.

This past week on 30 Sivan, our family marked Bubby’s second yartzeit. It’s an appropriate time to remind ourselves that although we cannot know the Vys of the world we remain faithful to our destiny, knowing that it is the only hope to straighten all that’s crooked. 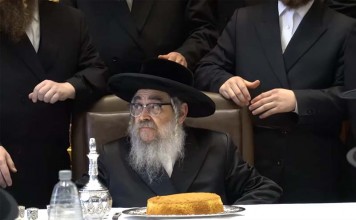