After being legally barred from ascending to the Temple Mount and prohibited from carrying out a personal Flag March in the Old City of Jerusalem, Otzma Yehudi leader and MK Ben Gvir spoke to media Thursday outside the Damascus Gate entrance.

His appearance outside the Old City took place just hours after the High Court declined to entertain his petition to be allowed to march, saying there was no time for a proper hearing and response on the issue.


The court noted that although it was agreed between Israel’s political/security cabinet and the police and organizers of the march to postpone the event until next Tuesday, Ben Gvir refused to wait and insisted instead on marching Thursday (June 10) as had been previously scheduled.

“The assessment of the intelligence and Shin Bet sources indicates that this may, with a high degree of certainty, lead to a serious disturbance of public order that amounts to a violation of state security,” the Court said.

Ben Gvir had already told media Wednesday night that he would not disobey police instructions but would instead deliver a statement on the “severe precedent of revoking the immunity of Knesset members.”

Under heavy security and in the presence of hundreds of demonstrators both for and against his actions outside the Damascus Gate, Ben Gvir called on Israel Police Commissioner Kobi Shabtai to resign, calling him a “failure.”

While Ben Gvir was speaking to media, a young woman waved an Israeli flag; a young Arab male immediately grabbed it and tried to run but was stopped immediately by Border Guard Police, Israel’s Channel N12 News reported.

“I am not folding,” Ben Gvir said. “The commissioner is failing and he has to go; I will stay in Jerusalem. These terrorists,” – he pointed to the rioting young Arabs – “are threatening, and the State of Israel is surrendering; and the one who brought it upon us is the [police] commissioner,” he added.

“After 2,000 years of exile our ancestors dreamed of coming here and marching in Jerusalem,” Ben Gvir said.

“I expect Benjamin Netanyahu . . . to have his say. I know the prime minister’s men tried to lead a compromise initiative for me to march here at noon, but unfortunately it did not happen.

Gaza’s ruling Hamas terrorist organization issued a statement in response to Ben Gvir’s remarks, saying, “The Al-Qassam Brigades and the leadership of the resistance are closely following the provocative and aggressive actions by the usurpers and their leaders in Jerusalem and the Al-Aqsa Mosque. They warn against harming Al-Aqsa, and salute her free defenders in Jerusalem for their confrontation and resistance of the desecration of Al-Aqsa and the aggression against it.” 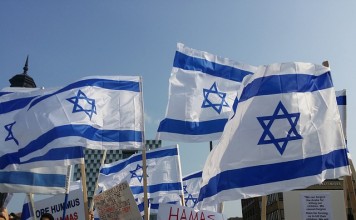 The World is Not Sleeping – So What’s Brewing? – The Tamar Yonah Show [audio]