Out of the approximately 500 students in my public high school graduating class of 1975, I am in touch with only one friend, Linda. Due to our last names, Stesney and Sullum, we were in homeroom together during our four years at Wyoming Valley West High School. We both worked on the high school paper, and we had some classes in common. I was drawn to her friendliness, her intelligence, and her easygoing manner.

Over the four years of high school, as well as during my visits back to my hometown, Linda often came for a Shabbat or Yom Tov meal. She was an only child of blue-collar workers, and she enjoyed the noise and liveliness of our home filled with children and grandchildren. Linda’s knowledge of Judaism grew.


In addition to the qualities I mentioned, Linda was also a pretty blonde and charming. I was sure that she would end up marrying a Jewish doctor. In the end, Linda, who became a lawyer, did not marry a Jewish doctor, thank G-d. Although she had been raised in a Catholic home (she even lived on Church Street in a town of 6,000 residents called Swoyersville), with time she became less religious. She ended up marrying a great guy, a non-religious Catholic from Brazil. Marun’s father had deserted his family, and this was a major factor in Marun’s disenchantment with Catholicism.

I made aliyah to Israel in the summer of 1981. During my trips back to the U.S. as a single and later married with a family, Linda would come to visit. During our trip in the summer of 1991, Linda introduced us to her husband. As life became busier, our contact was sometimes limited to the once-a-year email which I would send Linda on December 25th, her birthday, or the occasional card Linda would mail wishing us a happy new year or a happy Chanukah. Our trips to the U.S. became less frequent as well.

Imagine my joy when, last year, I received an email from Linda saying that she would be coming to Israel for the first time in the fall of 2018. Linda asked me for a reading list to prepare them for the trip to Israel. I asked around and people gave me suggestions of which books to suggest that she read as preparation for her visit with her husband. On the list were O’ Jerusalem, The Source, The Haj, and many others.

Originally, I understood that only Linda and her husband would be coming. Once they were here I discovered that they had brought their two children as well. They came for a week in order to attend the wedding of a son of close friends of theirs. The groom, who is serving in the Israel Defense Forces, was engaged to an Israeli woman. The mother of the groom had planned a tight schedule for her group of friends and relatives who had come in for the wedding. She had arranged trips to the Dead Sea, Masada, Akko, Caesarea, the Old City of Jerusalem, etc. Instead of going on the Old City tour of Christian sites, Linda and Marun signed up for the tour of Jewish sites.

Due to our hectic schedules, it was quite a feat to find a free slot that overlapped, but we managed. I postponed a visit to the doctor and squeezed them in before I had to travel to the town of Kiryat Arba in order to pick up three of my grandchildren. I had a bit of an awkward problem to contend with before meeting up with Linda and Marun. I needed to inform them about the laws of negiah. Eight years ago, when Linda and Marun had driven out to Long Island to see us when we were in New York, Marun had come up to me with a big smile and hugged me. It seems to be a very common practice amongst non-Jews and Jews who are not religious. I did not want a rerun of that scene during our meeting in Jerusalem.

How should I deal with it? I discussed it with my husband, Abe, and decided that I would write Linda an email before we met. I made it brief and to the point. Linda wrote me back that she would inform her husband. (I sometimes find that non-Jews are more accepting of Jewish practices than some Jews. That is a sad commentary.)

I chose to meet at a restaurant called Café Shalva, whose staff includes people with mental and physical disabilities. I arrived before Linda and Marun, who were delayed because Linda had lost an envelope with money in Tel Aviv. They retraced their steps in the Central Bus Station, and Linda found the envelope near the information counter where they had been.

When Linda told me about their search for the envelope with the money, I wondered why they had money in a separate envelope and not in her wallet, but I didn’t ask. I informed Linda about the special prayer for finding lost objects. I told her that after reciting the prayer, one gives charity in memory of a rabbi named Rabbi Meir Baal HaNes, and I told her a snippet about his life. As usual, she was fascinated by my recounting this information. Due to their delayed arrival, we only had about two hours to reminisce, talk about Israel, update each other about our families, and enjoy the time together.

I gave Linda a pair of hand-made earrings that a young Israeli woman had created. I gave Marun a booklet of postcards of the 12 tribes, since I knew they had not made a trip to see the Chagall windows at Hadassah Hospital in Ein Kerem. He was really interested in learning more about the tribes. He asked me what tribe I belong to, and I told him that most Jews are from Judah and Levi.

At the café. Linda told me that she hadn’t known what gift to buy for me, and so she decided to give me money to donate to charity. I told her that this is the best and most fitting present they could give me. The contents of the envelope that she had lost and then found ($300 which I changed it to shekels) is now in the hands of a man I know, a father of ten, who suffers from multiple sclerosis.*

Linda and Marun are two non-Jews who are helping in tikkun olam.

*If you would like to donate money so that my friend can purchase more vitamins and supplements, which are making a positive change in his health, please contact me at ahershberg@gmail.com. 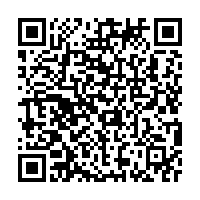