It was a day featuring multiple ominous sets of words: erev Shabbos, power outage, refrigerator repairman, roller coaster, and on and on. I should have seen the proverbial handwriting on the wall, but there was little if anything I could do about it in any case.

It actually started out with an amusing misunderstanding that predictably ended up with the joke being on yours truly.


¨Would you be able to spend Shabbos in yeshivah this week?¨ my husband had asked one of the rebbeim early the previous week.

But when that rav innocently posed the question to his wife, she somehow did not hear the ´yeshivah´ part.

¨What?¨ she practically shouted, ¨Rav Klein invited us for Shabbos?¨

Her husband smilingly explained that the ´invitation´ was not to the Kleins´ home, but rather to supervise the yeshivah Shabbaton. His wife was visibly disappointed, and unequivocally declined the honor.

The rav found the exchange humorous and happily shared it with my husband, who subsequently told it over to me. We regularly have a list around the block of potential Shabbos guests, from the yeshivah, the shul, the extended family, etc. Truthfully, inviting the yeshivah staff as well had never even occurred to us. However, we both were in agreement that, under the circumstances, we should extend an invitation to this rabbi and his family. Thankfully, they lived in our community and would not require sleeping accommodations like many of our other guests.

To make a long story short, my husband issued the invitation and they gratefully accepted; so, other than our previously arranged company, we were now expecting this rabbi, his wife, and their eight kids to join us for Leil Shabbos dinner.

The forecast for Thursday through Shabbos predicted both Mashiv haruach and Morid hageshem in abundant quantities, and I watched in fascination as our entire patio set was incredibly blown clear across our large mirpeset. But luckily I was ensconced in my kitchen for the foreseeable future, admiring the stormy show from the comfort of my blessedly warm and dry home.

Finally at nearly 2 a.m. on Thursday night, I set the oven on timed bake and slid in two trays of sweet and sour ribs. They needed a few hours to bake and I was in no shape to stay awake a moment longer. Desperate times indeed called for desperate measures.

I had expected to be awoken by the incessant beeping of the oven when it automatically shut off; instead I woke to the disco-like flashing of the red display on our bedside radio alarm clock.

¨Huh?¨ I asked groggily, and none too eloquently.

¨Apparently we had a power out,¨ my husband informed me.

At that I sat bolt upright in bed and then washed up and ran downstairs. The clock on the microwave showed all zeroes, but b´chasdei Hashem, the oven clock read 3:52 a.m., just minutes shy of the 4 AM shut-off time I had programmed. I placed the two pans on the counter, and briefly checked my emails before returning upstairs.

¨How do these things happen to you?¨ inquired my good friend, in response to an email regarding a tangled tale of our recent overseas trip.

¨I guess the same reason that we had a power-out overnight the ONE time I left my oven on timed bake so I could finally get to bed at 2 a.m.! LOL.

“PS: All is b”H well. It seemingly shut off shortly before it was programmed to be done in any case…¨ I responded without missing a beat.

Turns out my celebratory mood was a bit premature.

When I returned to the kitchen to stow the two pans in the refrigerator, I noticed that although the motor was seemingly running, and the contents were, b”H, very cold, the fridge display was not lit up.

I wasted a few precious erev Shabbos moments looking up the number of a local appliance repairman and then phoning him. After explaining the situation, my blood pressure shot up and my pulse began to gallop when I heard his somber reply,

¨Not only do I think it´s a problem, I know it´s a problem! Make sure you have a spare fridge for Shabbos… and schedule an appointment for Sunday!¨

Oh, no! Here we go again! We were already on our third surge protector, but apparently to no avail. And I well remembered how that technician’s last visit had cost us a whopping 1,500 shekel.

Unfortunately, I had no time to dwell on all that, as I hurried to resume my erev Shabbos cooking and cleaning regimen. I even uncharacteristically asked my shell-shocked husband to please call the repair service to schedule an appointment for Sunday… and to grill the marinated chicken capons on our outdoor grill despite the hurricane force winds.

In the meantime I rushed around completing one seeming interminable Friday task after another, figuratively patting myself on the back as I crossed each successive item off my lengthy to-do list.

I had just set the timer for the hot plate and covered it with several layers of foil when the unthinkable happened: Another unexpected and certainly ill-timed POWER OUT! Needless to say, the oven turned off, as did the hot water boiler and virtually every other whirring appliance for miles.

Baruch Hashem, the dishwasher had just finished its cycle, and likewise the dud shemesh had heated up sufficiently over the course of many hours so that we were all zoche to hot showers. But I had to eventually bite the bullet and take mine in our windowless attic bathroom, with only a minimal amount of light coming from the open door. (The minor things we routinely take for granted!) Thankfully the lights came back on as I was about to wash my hair.

Then I sped downstairs to belatedly reheat the food and reset the timer. By now it was within half-an-hour of licht benching and I despaired of getting everything done in time.

Somehow we, b”H, squeaked to the finish line, but the best was yet to come. Shortly before I had to shut down the refrigerator controls for the duration of Shabbos, I noticed an erev Shabbos mirage: The refrigerator display had miraculously returned to life! Apparently the second power outage had somehow reset the refrigerator´s computer chip, and although the numbers were low due to hours of being shut off, we were blessedly back in business!

A couple of hours later, the wind blew our bedraggled, rain-soaked guests in and, contrary to my past experience, these children were unusually well-behaved and helpful. To my shock and delight I did not even have to don dark sunglasses for the duration of Shabbos to avoid eye contact with the expected federal disaster area that had once been my dining room! In fact none of us could believe that an extra ten people of various ages had eaten Shabbos dinner with us.

Better still, when I nervously turned the refrigerator controls back on after Shabbos, the display showed perfect numbers. I felt like I had unanimously won the gold medal at the Olympics!

And first thing Sunday morning I was thrilled to call and cancel the service call. The hair-raising roller coaster ride had blessedly sputtered to a glorious stop, and all that remained to be done was to catch my breath, sincerely thank Hakadosh Baruch Hu… and of course write up my latest convoluted adventure… 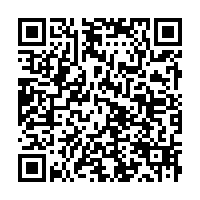