The Gemara in the beginning of Avoda Zara describes a peculiar conversation that will take place in the end of days. Hashem will bring a Torah scroll and say whomever occupied himself with the Torah shall come and take his reward. Immediately, the nations of the world will gather in disarray. Hashem will then tell them do not come in disarray; rather let each nation enter individually.

The Roman Empire will enter first. Hashem will ask them, with what did you involve yourselves? They will answer, “Master of the Universe, we established many marketplaces, constructed many bathhouses, and amassed much silver and gold. And all this was only so that the Jews can toil in Torah.” Hashem will say to them, “Fools of the world! Everything that you did was for yourselves, and you are not deserving of any reward. They will then leave in despair.


The next nation to enter will be the Persians and the conversation will be similar. They will claim to have built bridges and conquered cities and waged wars all so that Klal Yisrael could learn Torah. and they will receive the same response. The Gemara says that this will repeat with all the nations of the world.

The Brisker Rav asked a simple question on this Gemara. If we are dealing with the end of days and the knowledge of Hashem is abundantly clear to all, how could each nation think of deceiving Hashem? Did they really think they would succeed in convincing the Master of the Universe, the One who knows all inner thoughts, would believe that these nations did things in order that Klal Yisrael could learn Torah? how could they have the audacity to make such a claim?

The Brisker Rav answers based on a Rambam in the introduction to Pirush Hamishnayos. The Rambam says that everything in this world indeed happens for the sake of the Torah. he says if you see a palace built in some far-off place and you are wondering what is the purpose of this palace, how can it benefit the Torah? The truth is one day a Torah scholar will be passing by and will stop in and benefit from the palace. That is the reason for its existence.

In the end of days, all this will become clear to all. In fact, the bridges and markets and everything else that was constructed in the world was in fact for the sake of the Torah, one way or another. When each nation will come to Hashem and request reward for doing things that enabled Klal Yisrael to learn Torah it is because they will now see that in fact that was the underlying reason Hashem allowed these things to come about. They will therefore request reward for the bridges that enabled Torah learning. However, Hashem will tell them that this was not their intention. They had built all these things for their own benefit. So, while its true the Master of the Universe allowed them to come about for the sake of the Torah, since it was not their intention, they will not receive the credit for it.

Last week thousands of Jews gathered for a Siyum HaShas in MetLife Stadium. It was a a tremendous simcha and a tremendous kavod shamayim was created by the event. Additionally, the inspiration that many took from the event to begin learning more is also an enormous attribute to the event.

Based on the Rambam we mentioned above, ultimately, why was MetLife Stadium built? Without a doubt, it was built to host the Siyum HaShas and have the inspiration and kavod shamayim that took place last week, and seven and half years ago. A video was sent around of Mr. Sol Werdiger, chairman of Agudath Israel of America’s Board of Trustees, who related the following story: At the signing ceremony when the Agudah leased MetLife Stadium to use for the Siyum HaShas, a man got up and said he wanted to say a few words. He was the man who worked for the owners of the stadium and he was responsible for building the stadium. He said it took ten years of his life and a billion dollars to build the stadium. And at a certain point he did some retrospection and asked himself, what did I accomplish? I built a stadium where people can come to watch sport games, drink beer and this did not give me much satisfaction. But now that I see that the stadium will be used for this purpose, I can see how it was worth ten years of my life and all the money that was put into it.

I don’t know if this man knew what he was talking about or not, but it was surely the truth. We should have this perspective in everything that we do in life. Everything that we do is in one way or another to benefit the Torah. if we would have it in mind our reward would be so much greater. 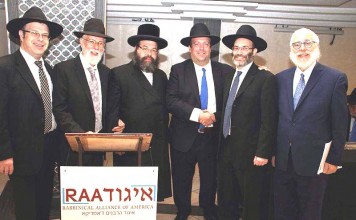