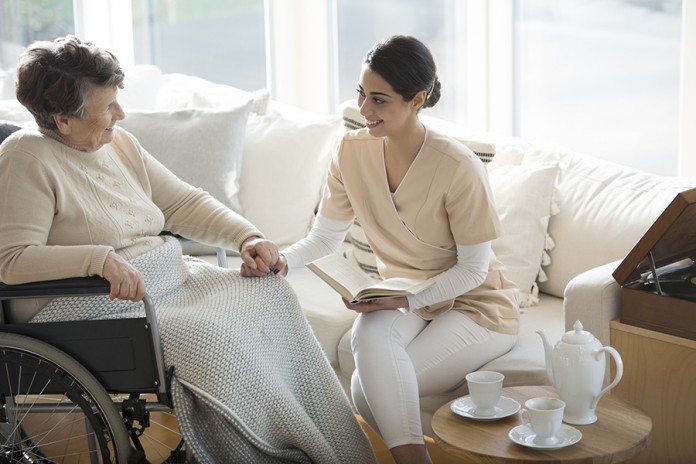 The role of a caretaker is certainly not one that we ask for. It is a very daunting and challenging responsibility. At the same time, it is a sublime opportunity which involves the lofty mitzvah of vehalachta bidrachav, walking in Hashem’s ways. For as we say in the Shemonah Esrei, Hashem is mechalkel chaim bechesed, He sustains life with kindness. Similarly, Dovid HaMelech says in Tehillim, “V’Atah mechaye es kulam, and You (Hashem) keep everyone alive.” If you are a caretaker for a parent, then every moment you are also fulfilling the fifth commandment of kabed es avicha ve’es imecha, to honor your father and mother. This mitzvah includes ma’achilo, mashkayu, motzio umachniso and malbisho, feeding them, giving them drink, helping them in their comings and goings, and helping them get dressed. These are all duties of a caretaker.

This occupation promises the Biblical rewards of l’maan yitav lach ul’eman yaarichun yamecha, in order that it should be good for you and you should have length of days. The fifth commandment is on the first tablet which contains the mitzvos between us and Hashem. It is placed there because there are three partners in man: Hashem, father and mother. Hashem says, I’m the silent partner. If you show honor to your father and mother, I will know that you honor Me as well.

If a husband is caring for a wife, he is living up to his commitment that he made to her in the kesuvah where he pledged that he will oker, ezon, va’afarnes, to cherish, feed, and support her. If a wife is caring for her husband, she is fulfilling her duty as an ezer k’negdo, being a helper for him. And, when parents have the weighty and sad task of caring for a sick or special child, they are living up to the expectations that Hashem has on them having brought that child into the world.

Initially feeling very overwhelmed is normal for a caretaker. It is, after all, often a 24/7 obligation, often with no light at the end of the tunnel. We must first be fortified with the awareness that ein HaKadosh Baruch Hu ba bitrunya im habriyos, Hashem doesn’t ask from us more than we can handle. This is also the belief behind our national proclamation, na’aseh v’nishma, we will do and we will listen. This affirms that we believe we can tell Hashem that we will do it even before we hear what it is because, if Hashem tells us to do it, then it is certainly something that we can handle.

Another thought that is helpful to consider when one is a long-term caretaker is that the Torah teaches us the reward for honoring parents is arichas yamim, long life. Offering a reward for a mitzvah is something that the Torah almost never does. So, why does it do so in this case? Rishonim explain that the Torah is giving us chizuk, encouragement, not to be dismayed if many opportunities pass you by because you are taking care of somebody. Don’t be discouraged by the fact that you’re stuck in the house, that you miss simchos, that you can’t spend more time with friends, or even visit relatives. Hashem says, I’ll make it up to you and lengthen your life so that you will recover all the time that you missed out on.

A caretaker should remember the way of Hashem, namely middah k’neged middah, Hashem always treats us measure for measure. If we are there in someone else’s time of need, Hashem will be there for us when we need Him. Dovid HaMelech teaches us ashrei maskil el dal b’yom ra’ah yemalteihu Hashem, fortunate is one who acts wisely with one who is in need as Hashem will save them from an evil day.

May it be the will of Hashem that in the merit of our becoming more sensitive caretakers may we merit long life, good health and everything wonderful.