An Israeli policewoman was lightly wounded Sunday night during Arab rioting in the Shimon Hatzadik neighborhood in Jerusalem.

The police stated that it received calls about a violent disturbance in the neighborhood, during which rocks and objects were thrown at Israelis, resulting in a person being hit in the head.


Police forces who arrived at the scene restored order while arresting two Arab suspects, an adult and a minor.

During the operation, a policewoman was lightly injured and required medical treatment.

Jerusalem has been the scene of nightly clashes with Arab rioters since the beginning of the Muslim month of Ramadan.

The Shimon Hatzadik neighborhood, also known as Sheikh Jarrah, has been the site of mounting tensions as the court is set to rule on the status of 28 Arab families who are living illegally in Jewish-owned homes in the area.

Jews living in the area have reported on repeated attacks by their Arab neighbors.

Osama Al-Qawasmi, Member of the Fatah Revolutionary Council and the official spokesperson for the Fatah Movement, said that “the people of Jerusalem are subjected to the massacre of ethnic cleansing, racial discrimination and persecution at the hands of the extremist Netanyahu government in the face of the world’s silence and its official institutions.”

“Our proud and heroic people in Jerusalem are facing the worst practices of injustice and the policy of displacement, exile, destruction of homes and arrest,” Al-Qawasmi alleged, calling on the world to “act immediately to stop this Israeli aggression immediately.”

The land in question was purchased by the Sephardic Community Committee in Jerusalem and the Knesset of Israel organization before the establishment of the state of Israel.

The Arab families settled in the neighborhood after the War of Independence in 1948, when Israel lost control over this part of Jerusalem, and their residence was approved by the Jordanian occupation government, which controlled the area until 1967, at the initiative of the UNRWA.

In 1956, the Jordanian government and UNRWA illegally settled 28 families and they were granted tenant status for a period of 33 years, while ownership of the place remained in the hands of the Jordanian custodian.

The Jerusalem District Court recently rejected several appeals and ruled that the eight Arab families who have lived there illegally for decades should be evacuated. The court initially offered them to pay rent to the Sephardic Community Committee, which owns the land on which the Jordanians built the homes, but they refused to do so and were therefore ordered to be evicted. 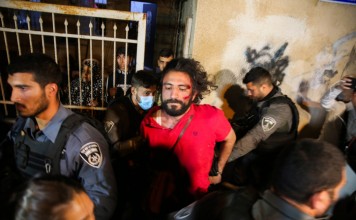