Amazon owner Jeff Bezos announced Monday that he plans to ship out on the first human space flight by his Blue Origin company’s New Shepard rocket when it launches July 20 – a date that was announced on Instagram.


July 20 is also the 52nd anniversary of the landing of the Apollo 11 on the Moon.

Bezos will be joined by his younger brother Mark and whoever makes the highest bid at an auction for a ticket to join the 30-minute flight, which will be launched from Van Horn, Texas. The bidding in that auction, incidentally, has so far reached a current bid of $3.2 million.

“Ever since I was five years old I’ve dreamed of traveling to space,” Bezos said Monday on Instagram. “On July 20th I will take that journey with my brother. The greatest adventure with my best friend.”

When the highest bidder hands over the money for his ticket to ride the spaceship, the payment will be donated to Blue Origin’s “Club for the Future” foundation. The organization’s mission is “to inspire future generations to pursue careers in STEM and to help invent the future of life in space,” Bezos said.

While in flight the passengers will experience about three minutes of zero gravity before landing back on terra firma, plus enjoy a magnificent view of the planet from space through the capsule’s huge windows.

The New Shepard rocket ship – designed to carry up to six passengers per trip — has made 15 human-free flights in preparation for eventual launches with human crews to guide the vessel’s “someday” space tourists.

“To see the Earth from space – it changes you,” Bezos declared.

Bezos, one of the world’s wealthiest men with a net worth of nearly $200 billion, is set to retire as CEO of Amazon about two weeks before the flight, to become the executive chairperson of the company’s board of directors. 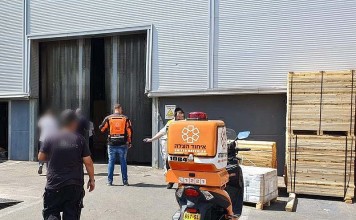