Suheir Barghouti, the mother of two brothers suspected of carrying out two deadly terror attacks in Samaria in December 2018, has been arrested by Israeli military forces, Arab media reported Tuesday.

“During the night, IDF and Israel Security Agency (Shin Bet) forces, the Border Guard Police and Israel Police arrested 25 suspects accused of involvement in terrorist activities, popular terror and violent disturbances against civilians and soldiers,” the IDF said in a statement. No further details were provided.

An order was issued Monday by the IDF to demolish the home of 32-year-old Assam Barghouti, accused of carrying out a shooting attack at the Givat Assaf junction in Samaria last December that took the life of a young baby and two IDF soldiers, as well as wounded eight other people.

“The demolition order was signed after the appeal brought by the terrorist’s family against the demolition was denied,” the IDF said in a statement.

The Barghouti clan is a prominent family in the Hamas terrorist organization in Judea and Samaria. The father of the two brothers, Omar Barghouti, has spent a total of 28 years incarcerated in Israeli prisons, including for the 1978 murder of an IDF soldier.

“Furthermore, a notice was delivered to the family of the terrorist Saleh Barghouti through their attorney, regarding the intention of the IDF to demolish the apartment where he lived. The family now has the opportunity to file an appeal against the demolition,” the statement read. (Saleh, suspected of carrying out the deadly attack at the Ofra junction, was killed during an Israeli arrest operation following the attack.)

Saleh Barghouti’s uncle, Nael Barghouti, was also convicted for the 1978 murder of an IDF soldier along with Omar Barghouti. He is the longest-ever incarcerated Palestinian Authority prisoner, convicted of other crimes as well. 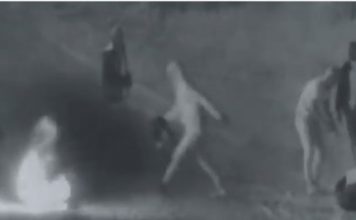