(JNS) Palestinian Authority leader Mahmoud Abbas spoke on Sunday about strengthening ties with the United States during a pre-recorded video address at a virtual annual national conference of the lobbying group J Street.

Abbas said that ties between the P.A. and the United States were severed during former President Donald Trump’s administration after recognizing Jerusalem as the capital of Israel in December 2017 and the moving of the U.S. embassy to Jerusalem six months later, in May 2018, followed by the cutting off of aid to the Palestinian Authority.


Abbas asked for the organization’s assistance to “repeal all laws that block the road toward enhancing Palestinian-U.S. relations.”

The most important sticking point, according to Abbas, was the inclusion of the Palestinian Liberation Organization (PLO) and its affiliates in the 1987 Anti-Terrorism Act, deeming them terrorist groups.

He said the designation was no longer relevant as the PLO was recognized by Israel as a legitimate representative of the “Palestinian people” in the 1993 Oslo Accords. He also promised to remove obstacles on the Palestinian Authority side but was not specific about which ones.

The P.A. has long been criticized for incentivizing terrorism by paying stipends to families of Arabs imprisoned or killed while committing terrorist acts against Israelis. The Taylor Force Act makes it illegal for the U.S. to provide aid, with some humanitarian exceptions, to the Palestinian Authority if they continue to provide these terror stipends.

Abbas reaffirmed his support for a two-state solution to the Israel-Palestine conflict based on pre-1967 borders, with eastern Jerusalem as the Palestinian capital.

This capital, he said, would be “an open city for all believers and followers of the three monotheistic religions.”

“Only then will the states of Palestine and Israel be able to prosper and live side by side in peace and security,” he added.

Abbas’s message was reiterated by J Street in a tweet sent that day.

At #JStreet21, Palestinian President Mahmoud Abbas reiterates the PA’s support for a two-state solution and discusses his hopes for revitalized US-Palestinian relations. pic.twitter.com/94yjgypCX9

‘This wasn’t a huge surprise’

The platform given to Abbas during the conference was criticized by Republican Jewish Coalition executive director Matt Brooks in an email to donors on Monday, calling Abbas a Holocaust denier and funder of terrorism.

“This wasn’t a huge surprise, as we have always known that J Street is anti-Israel,” Brooks said in the email. “What was also unsurprising was the number of participating Democrats who refused to call Abbas out for his extremism and his incitement of violence towards Israeli and American Jews.”

“Recently, [U.S.] President [Joe] Biden caved to Abbas and resumed aid to the Palestinian Authority, freeing up more funds for Abbas to spend on terrorism. So it wasn’t surprising to see so many Democrats choosing to share a stage with Abbas,” wrote Brooks. “They’re too scared of their base, and frankly, it isn’t clear that they have any problem with what Abbas stands for.”

J Street has also recently indicated support for a newly introduced bill in the U.S. House of Representatives, which if passed would condition U.S. aid to Israel on ensuring that no tax dollars contribute to alleged civil-rights and human-rights abuses against Palestinians.

In a series of tweets, the AIPAC expressed opposition to the bill, calling it “unnecessary and redundant,” as fiscal aid for Israel already can only be used for legitimate self-defense and internal security purposes. 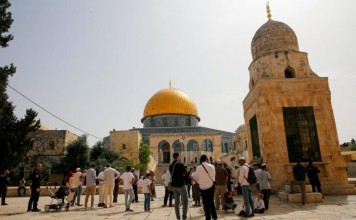