United Nations International Atomic Energy Agency chief Yukiya Amano has died at the age of 72. The exact cause of death is unknown, although Amano was seriously ill for some time.

The UN agency’s secretariat made the announcement Monday, saying in a statement, “The Secretariat of the International Atomic Energy Agency regrets to inform with deepest sadness of the passing away of Director-General Yukiya Amano.”

According to the agency, Amano was planning to write to the Board of Governors shortly to announce his decision to step down in March 2020, well before the end of his third four-year term, which was to end on November 30, 2021.

Amano underwent an unspecified medical procedure last September, according to the IAEA, and had appeared increasingly frail at every appearance since.

As IAEA director-general since 2009, Amano succeeded Muhammad ElBaradei, leading the UN agency through a period of intense diplomatic negotiations over Iran’s nuclear program. He oversaw the signing of the JCPOA nuclear agreement between Iran and six world powers — Britain, China, France, Germany, Russia and the United States — a 2015 accord which provided Iran with relief from sanctions in return for curbs on its nuclear program.

Numerous world leaders have expressed their condolences and paid tribute to Amano.

United Nations General Assembly President Maria Fernanda Espinosa Garces said in a statement she was “deeply saddened” by the news, noting that Amano had “worked tirelessly to promote a safer, denuclearized world. His legacy will not be forgotten,” she wrote.

Deeply saddened by the news of the passing of Mr. Yukiya Amano, Director General of the International Atomic Energy Agency. Mr. Amano worked tirelessly to promote a safer, denuclearised world. His legacy will not be forgotten. My condolences to his family and all IAEA staff.

Even Iran’s deputy Foreign Minister Abbas Araghchi tweeted his “deep condolences,” saying the two “worked very closely” together during the JCPOA talks. “I commend his skillful and professional performance . . . [that] resulted in complete closure” of the accord, he wrote.

The IAEA flag is to be lowered to half-staff. The statement by the agency has not indicated a time frame for a decision on a successor. Argentine ambassador to the IAEA, Rafael Grossi, has made himself available as a candidate and according to RFE/RL, Amano’s chief of staff, Cornel Feruta of Romania is also likely to run. 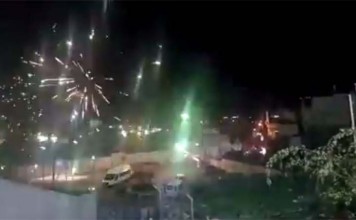