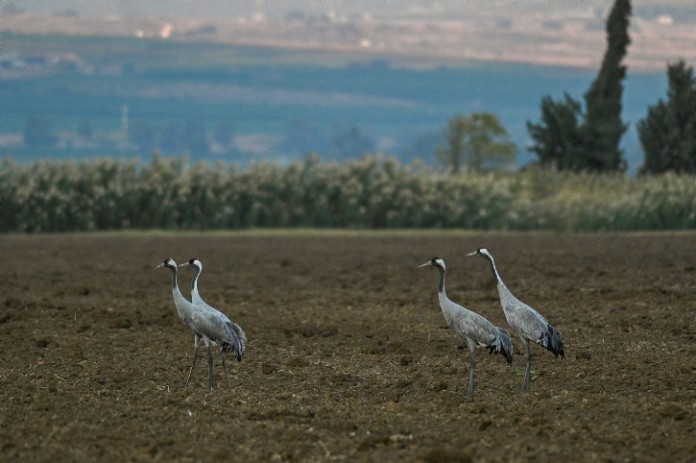 More than a million birds in Israel have been killed in 20 avian flu-infected hotspots around the country so far due to outbreaks of the avian flu caused by the H5N1 virus strain.

That figure, however does not include at least 5,200 wild cranes that have died of the disease as they pass over the Agamon Hula Lake nature reserve in the worst ecological disaster ever to hit the country.

Around half a billion birds stop off in Israel on their migratory trip south to Africa for the winter. But one out of five has been infected with avian flu this season, officials say.

Israel’s Ministry of Agriculture has been battling the outbreaks of avian influenza disease caused by the H5N1 virus strain. In view of the risk to human and animal health, so far more than a million birds have been killed in 20 bird-infected hotspots across the country.

The World Organization for Animal Health is urging countries worldwide to raise awareness about bird flu, with at least 39 other countries reporting outbreaks. Scientists also say the avian flu is getting more aggressive.

The ministry meanwhile has been battling the outbreak largely in areas located around the Sea of Galilee, the Hula Valley and the Jezreel Valley.

Israel’s Agamon Hula Lake nature reserve is an idyllic spot, one located on the most important bird migration routes in the world.

Some 100,000 wild cranes have arrived in Israel since October, as they do every year for a pit stop on their migration to Africa. More than 40,000 of the birds are estimated to have remained for their winter vacation.

But at least 5,200 of the cranes have died of the bird flu in the current outbreak. Employees of the Agriculture Ministry are continuing to treat the active centers, including in the Agamon Hula nature reserve.

The good news is that all centers of infection have been isolated.

At egg farms in Moshav Margaliot, egg laying hens were crowded in the coops, and the virus could not be prevented from passing from hen to hen. The number of birds destroyed at the site was approximately 537,000 laying hens.

Following the killing of the laying hens, there was a fear of a shortage of about 10 percent of eggs available for consumption in Israel and about 2.4 percent of the organic eggs.

In response to the reported concern over an egg shortage, the Agriculture Minister Oded Forer ordered the opening of tariffs, thus allowing the import of eggs to Israel.

That move has ensured that any possible egg shortage will end before it really gets started. At present, there is no shortage of turkey or chicken in Israel.