On Sunday evening, United Hatzalah volunteer EMT Gavriel Bitton rescued two people, a father and a daughter, from choking in the same incident.

Gavriel who hails from Tel Aviv and serves as team leader for United Hatzalah in the south-eastern district of the city, has been a volunteer for nine years, but this was the first time he responded to a double choking incident.


Gavriel was returning home from his nightly run when his communications device alerted him to a medical emergency in the building across the street. Without hesitation, the experienced EMT grabbed his medical kit and ran to the location. He raced up the stairs and entered the apartment to find a man in his thirties leaning on his sofa, red-faced and not breathing, with his frightened wife by his side, holding their baby daughter.

Gavriel quickly pushed the man to a different position to allow air to flow into his mouth. The wife explained that the man had a severe allergy to dust, and was suffering from an allergy attack, causing his airway to be restricted.

But just as Gavriel was stabilizing the man and everyone began to breathe more easily, the couple’s 8-months-old baby began choking, too. The mother, going through a second choking of a loved one in the span of a few minutes, turned pale and felt dizzy.

Knowing only too well that a choking baby incident can quickly become fatal, Gavriel immediately grabbed her from her mother’s hold and turned her over on his arm, administering two measured back blows.

After just a few seconds, the baby cleared her airway and began breathing normally again. The volunteer stayed with the family, and taught the mother how to perform the Heimlich maneuver, until the ambulance had arrived.

Both father and daughter were evacuated to the emergency room to make sure that everything with them was fine. 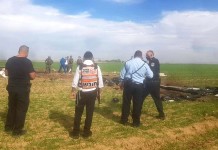 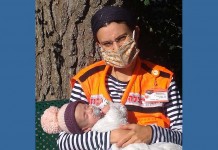 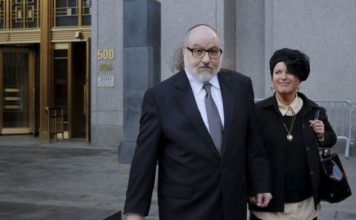