The “Lithuanian” and Hassidic” streams of the Orthodox Jewish community in the United Kingdom has begun — belatedly — vaccinations against the measles virus, as the illness spreads to London and elsewhere in the country.

The outbreak is believed to have followed travelers returning from Israel after a visit for the Jewish holidays.


More than 500 children in the British Jewish community have received emergency vaccinations over the past two months as a measles epidemic begins to take hold in England. More than 60 cases of the illness have been reported since the start of October — a jump of more than 250 percent since January — primarily in northern London Jewish communities, according to the Jewish Chronicle.

Vaccination rates in the local strictly Orthodox Jewish community is “definitely lower than the general population and there are lots of reasons for that,” said Doctor Joseph Spitzer, who is affiliated with Cranwich Road Surgery in London and who spoke with the Jewish Chronicle.

Israel’s Health Ministry has been struggling to convince families of the importance of vaccinating their children, as thousands are believed to be at risk for either contracting the illness or becoming carriers, or both. More than 2,000 people have been infected with measles in Israel since March.

The week after an 18-month-old baby died of the illness in Jerusalem, rabbinic leaders at the Mir Yeshiva in the capital immediately invited medical teams into the institution and urged every student and staff member — citizen and foreigners alike — to accept the vaccination, regardless of insurance status.

Other Orthodox Jewish yeshivas in Jerusalem soon followed suit as well, with several rabbinic councils eventually ruling that choosing not to vaccinate one’s self and one’s children was similar to murder. 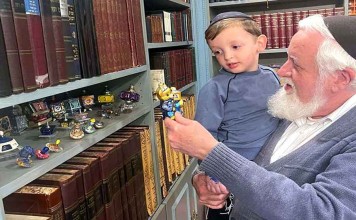