It was the Second Lebanon War. A battalion of IDF soldiers was moving forward on a city street as enemy fire rained upon them from a position above them. Ari Fuld and his unit ran into the field of fire to assist those soldiers. After 30 minutes, Ari’s unit was called back to help their own platoon, when some of the soldiers who had stayed behind sustained wounds from mortar fire.


Returning to his foxhole, Ari put his equipment bag back on when he suddenly felt something dripping out from underneath his combat vest. Fearing he was hit, Ari’s fellow soldiers checked to see if Ari was shot. But what they found was a larger mortar fragment that had landed in Ari’s foxhole and penetrated his equipment and water bag.

Heroism was one of Ari’s defining characteristics. Protecting Israel, Judaism, and the Jewish people, whether in combat, on the streets, or on social media was always paramount to Ari Fuld.

The incident in Lebanon strengthened Ari’s conviction that he had to redouble his efforts to teach Torah, support IDF soldiers, and defend the Jewish people.

But on 7 Tishrei 5779 (Sept. 16, 2018), while shopping in Gush Etzion, Ari was stabbed in the back by an Arab terrorist and mortally wounded. Ari’s last act of heroism was to chase down and shoot the Arab terrorist before the terrorist could harm the next victim he was running to stab. Ari was posthumously awarded the very rare Medal of Valor by the Israeli police.

Ari’s family and friends established The Ari Fuld Project to continue Ari’s mission and to keep his memory alive.

The Ari Fuld Project is working not just to support IDF reservists, security units, and spread Ari’s popular “Grill & Torah” series and Torah teachings, but to help other Zionist activists and defenders of Israel succeed in their missions, too.

The Ari Fuld Project is proud to announce The First Annual Ari Fuld Lion of Zion Prize for 2022/5783.

The prize will be awarded to activists who have dedicated themselves to building Eretz Yisrael and defending the Jewish people.

After much deliberation, it was unanimously decided that the most worthy recipients for the first prize would be two people who have selflessly dedicated their lives, time, money and efforts to building the Land of Israel and teaching Judaism to the masses, exemplifying the exact message Ari always worked to convey.

The Ari Fuld Project is proud to announce that this year’s recipients are Jeremy Gimpel and Ari Abramowitz, partners in building the Arugot Farm in Gush Etzion.

In 2017, Ari Fuld visited the fledgling farm, just after they had started to build and protect this strategic region of then-barren land in Gush Etzion. Even then, it was evident that what they were doing was amazing but also incredibly challenging.

Miriam Fuld, Ari’s wife said, “My Ari was so excited and proud to see the great work Ari and Jeremy were doing on the Arugot farm when he visited there in 2017. Ari and Jeremy love the land and people of Israel. They are builders of Israel, Zionist activists, and teachers of Torah. It was obvious they had to be our first recipients of The Ari Fuld Lion of Zion Prize.“

On Ari’s fourth Yahrzeit, Sunday, 7 Tishrei 5783 (October 2, 2022), The Ari Fuld Lion of Zion Prize 2022/5783 ceremony will be held live in Gush Etzion and livestreamed online for all to see. Other new and major projects that are in the works will also be announced.

We hope you join our mission and help support The Ari Fuld Project so we can continue spreading Ari’s message and his projects, and continue to award The Ari Fuld Lion of Zion Prize well into the future.

To donate and to watch the ceremony click here: www.AriFuld.org/2022. 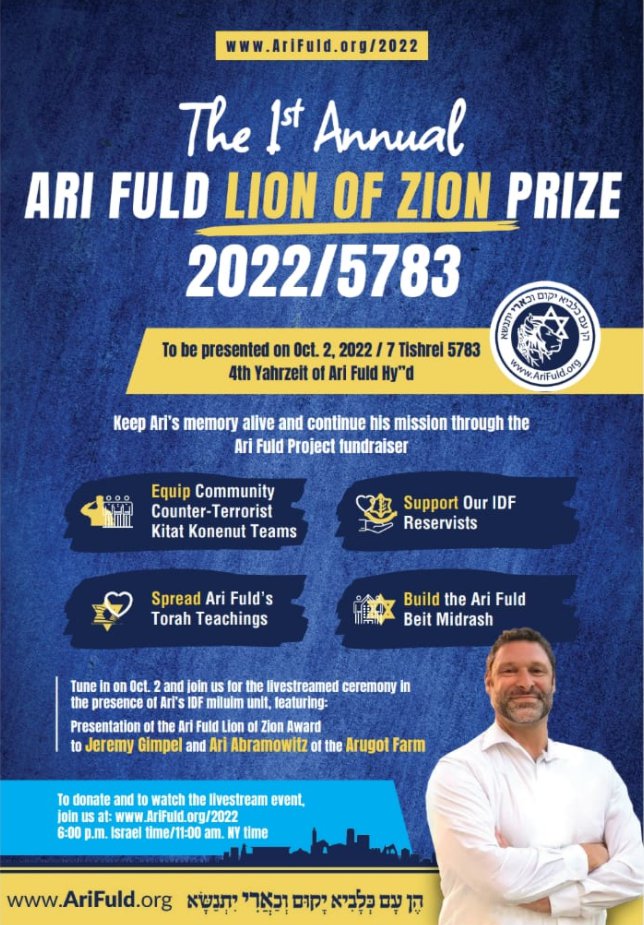 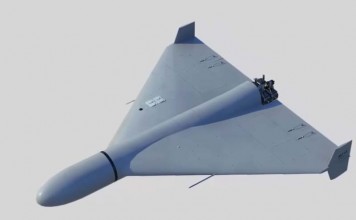