The Red Alert incoming rocket siren activated once when Gaza terrorists fired a rocket at Israeli civilian communities this weekend, did not activate the second time, and activated when it wasn’t at all necessary on the third time around. The Iron Dome anti-missile defense system was deployed before any of it began, however.

Two rockets were fired by Gaza terrorists at southern Israel on Friday night, according to the IDF.

The Red Alert incoming rocket siren activated at around 10 pm in the Gaza border communities of Nir Yitzhak and Sufa, sending residents racing for bomb shelters. At least one rocket landed in Israeli territory, according to the IDF.

The second rocket was launched almost two hours later, but landed in an open area, and so it did not trigger rocket alert sirens in any Israeli communities.

Not so on Saturday morning, however.

Residents in Kibbutz Nahal Oz and Kfar Aza were sent racing for bomb shelters with the sound of the Red Alert incoming rocket siren that was later identified by the IDF as a “false alarm.” The incident is under investigation.

On Friday afternoon, the IDF deployed Iron Dome anti-missile defense batteries in various sections of southern Israel in response to threats of revenge by Gaza’s ruling Hamas terrorist organization over the death of one of its members.

The terrorist was shot and killed on Thursday by IDF soldiers due to a misunderstanding, Israeli military officials said in a public apology issued swiftly after the incident. 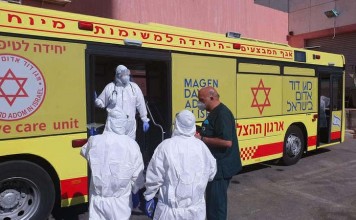