Hezbollah Secretary General Sayyed Hassan Nasrallah on Friday night told the Lebanese Al-Manar TV network that the objectives achieved and completed in the July 2006 war with Israel were still in place.

“Lebanon has been safe since 2006 and there is security along the southern the border and all of Lebanon. No one has given Lebanon this security as a gift, but it was achieved with the blood of its martyrs,” Nasrallah said.


“I suggest that Israel do not repeat its threat of returning Lebanon to the stone age,” Nasrallah said, and, with a showman’s flare brought out a map, saying, “Netanyahu presents maps when he speaks at the UN, I will use the map now.” Pointing to Israel’s southern region, without mentioning the reactor in Dimona, he said, “We can strike the entire region, including Eilat. Even beyond Eilat, if they have it.”

The interview, on the 13th anniversary of the 2006 war, Nasrallah said that “the deterrence lies between a popular force and a country that considers itself a great power in the region. This equation is recognized by the enemy with its leaders, officials and media.”

“We may or may not have missiles to shoot down planes. This is one of the areas of constructive ambiguity facing the enemy,” he said.

He explained that “in 13 years, the resistance is both qualitative and quantitative, and this is what the Israelis acknowledge and say. The growth in human capacity has been very large. The numbers have multiplied exponentially, as did the construction in the field, especially in Syria. In addition, the offensive force on the ground level is armed at a high level. […] The enemy now fears the resistance more than ever before.”

Getting to the threats feature of the show, Nasrallah said: “We can hit the Israeli north from any point in Lebanon, and as much as we want, and we have all the necessary information on all the targets there – technological, infrastructure, military, everything, but most importantly, the Israeli coastal plain, the enemy’s smallest geographical area on the map, starting from north of Netanya to south of Ashdod, this is about 45 miles. There are places where the width from the coastline to the West Bank is only 8 to 12 miles, this map hangs in our war room. 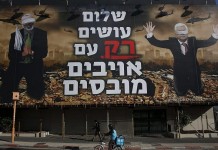