Arab riots and violence continued over the weekend in the Old City of Jerusalem, with accompanying violence aimed at Israeli military personnel in Palestinian Authority-controlled areas of Judea and Samaria, and “solidarity” rocket fire from Gaza.

No shortage of propaganda being disseminated by Palestinian militant groups as a flare-up in conflict between #Israel and #Gaza enters its second day. pic.twitter.com/p0rO3en8du


Police Commissioner Kobi Shabtai and the Jerusalem District Commander Doron Turgeman held a situational assessment during the day Saturday to discuss the ongoing clashes between Jerusalem Arabs and Jews.

Police increased their forces in the capital following days of rioting that began with the start of the Islamic holy month of Ramadan, in which observant Muslims fast until after sundown each day.

At least 1,500 police officers were deployed Saturday night in hot spots around the city.

Video: In the area between Independence Park and Jaffa Street W of Jerusalem City pic.twitter.com/sGAsgzRYe3

Following the situational assessment, the police commissioner issued a statement saying the events of the past week are “unusual.” Shabtai added, “We will do everything in our power to enable worship. . . for members of all religions.”

Saturday Night
At least three police officers were injured in Saturday night’s violence in Jerusalem. The Red Crescent emergency medical response organization said that 12 people were evacuated from the riots in the capital, including one who required hospitalization.

Arab rioters hurled stones and live fireworks at Israel Police operating in the Shiloach (Silwan) section of Jerusalem on Saturday. Arabs also sprayed an Israeli security guard with pepper spray in the neighborhood.

Dozens of Orthodox Jews also faced violence during the Sabbath in eastern Jerusalem neighborhoods, with Arabs cursing, yelling and attacking the Jews, according to Chaim Goldberg, a police reporter at the Hebrew-language Kikar HaShabbat news site.

Arab rioters attacked Israeli security personnel, hurling rocks and other objects, at the Damascus Gate entrance to the Old City of Jerusalem, according to Hebrew-language Israeli media. At least 200 Israeli police officers and other security personnel were deployed to the site.

Arabs also clashed with police in Jerusalem’s Mount of Olives neighborhood and Al-Tur both Friday night and Saturday night.

Ten Arab rioters were arrested Saturday night for rioting and violence in the Old City of Jerusalem, according to Haaretz.

According to Walla! News the ongoing unrest in Jerusalem is due at least in part to fears that Israel will not allow residents of Jerusalem Arab neighborhoods to vote in the upcoming Palestinian Authority parliamentary elections.

A leftist Jewish-Arab demonstration was scheduled for Saturday night in Kikar Tzion (Zion Square) in central Jerusalem, to protest “violence and incitement against the Arab population and peace activists.”

Organizers of the protest told the Hebrew-language Walla! News site that this week’s violence was due to “organized and orchestrated events aimed at agitating the area, harming Arabs and in this way the entire fabric of life in the city.”

Friday Night
More than 50 police cameras were smashed by Arabs on Friday night in the eastern part of the capital.

According to Israel’s Channel N12 News, 27-year-old Eli Rosen was also attacked by young Arabs while passing them on a walk with his dog along Shmuel HaNavi Street in Jerusalem. Documentation from the attack showed dozens of young Arabs attacking Rosen with clubs, stones and kicks.

“This is just a third intifada,” Rosen told reporters from his hospital bed at Hadassah Ein Kerem Medical Center.

Also Friday night, Orthodox Jews were harassed and threatened in the Jewish French Hill neighborhood of the capital.

At least 20 Israeli police officers were injured Friday night while attempting to stem the violence and dozens of rioters were arrested. 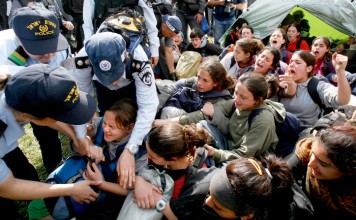