In a sharply-worded and wide-ranging speech before the UN Security Council on Monday, Israeli Ambassador to the UN Ron Prosor said that the time has come “to sweep out the cobwebs of old illusions – and plant the seeds for a truly ‘open’ debate on the Middle East.”

Speaking at the ‘Open Debate on the Situation in the Middle East,’ Prosor began by taking the UN body to task for losing ” any sense of proportion. Thousands are being killed in Syria, hundreds in Yemen, dozens in Iraq — and yet, this debate again repeatedly is focusing on the legitimate actions of the government of the only democracy in the Middle East.”


Still, he wanted to use opportunity to “address just a few of the myths that have become a permanent hindrance” to the discussion. Myths that “[i]n the barren deserts of the Middle East…find fertile ground to grow wild. Facts often remain buried in the sand. The myths forged in our region travel abroad – and can surprisingly find their way into these halls.”

He started by addressing the myth of ‘linkage’: that if the Israeli-Palestinian conflict is resolved, than so will all the other conflicts in the region. “The truth is that conflicts in Syria, Yemen, Egypt, Bahrain, and many other parts of the Middle East have absolutely nothing to do with Israel.” Resolution of the Israeli-Palestinian conflict, he added, “won’t stop the persecution of minorities across the region, end the subjugation of women, or heal the sectarian divides. Obsessing over Israel has not stopped Assad’s tanks from flattening entire communities…has not stopped the Iranian regime’s centrifuges from spinning.”

He then moved on to the myth of a humanitarian crisis in Gaza, quoting the Deputy Head of the Red Cross Office in the area to dispute it as an outright falsehood. “There is not a single civilian good that cannot enter Gaza today,” Prosor said. “Yet, as aid flows into the area, missiles fly out. This is the crisis in Gaza.” Yet, he said, “The Security Council has not condemned a single rocket attack from Gaza.

Prosor then addressed the myth that has purportedly kept the Palestinians from the negotiating table – that settlements are the main obstacle to peace. He refuted this by citing Gaza, where all Israeli settlements had been uprooted, but which has become an anti-Israel terrorist mini-state. He then went on the attack, saying that the real obstacle to peace was the Palestinian ‘claim of return’, which is tantamount to denying Israel’s right to exist as a Jewish state. “You will never hear Palestinian leaders say ‘two states for two peoples’…the Palestinian leadership has never, ever said publicly that they will give up the so-called ‘claim of return’ – neither to the Palestinian people, nor to the Arab World, nor to the international community, or to anyone else.”

As to the myth being perpetuated in the Islamic Middle East that Israel is “judaizing Jerusalem”, he said that “[t]hese accusations come about 3,000 years too late. It’s like accusing the NBA of Americanizing basketball.”

“In all of the pages that the UN has written about the Israeli-Palestinian Conflict, in all of its reports and fact-finding commissions, and in all of the hours dedicated to debate about the Middle East, there is one great untold story. Or – to be more specific – there are more than 850,000 untold stories….

He dismissed out of hand the final myth – “that peace can somehow be achieved between Israelis and Palestinians by bypassing direct negotiations,” saying that “History has shown that peace and negotiations are inseparable.”

Calling attention to the upcoming Yom HaZikaron and Yom Haatzma’ut holidays in Israel, he said, “We intentionally commemorate these two days one after another. As the Israeli people celebrate our independence, we carry the heavy weight of great suffering and sacrifice.” 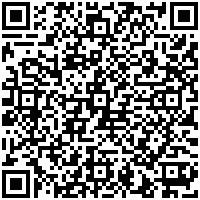