Former Peace Now Secretary General Yariv Oppenheimer, following the heartbreaking crash of the Beresheet spacecraft on the moon’s surface, tweeted on Sunday: “Israel’s obsession with the occupation of territories reaches the moon. There was no scientific contribution to sending the spacecraft to the Moon, just throwing more money to inflate the national ego. It’s not for nothing that most of the world’s countries have given up on this gimmick. We tried, we enjoyed ourselves, now let’s invest in science teachers, in education and in academia.”


Yes, Yariv Oppenheimer had to be the proverbial kid who got beat up after school every day, no doubt about it. Imagine, a nation that followed the exciting attempt of a small team of homegrown scientists to do something only seven countries had attempted and only three have done, then this individual says the one thing Israelis from across the nation have followed breathlessly for months – and some for years – shows what a bunch of power-hungry creatures they are.

Remember, this is the guy who, in his leadership capacity at Peace Now, employed spies to track every change in the Jewish settlements, any porch closure without a license, any development that merited involving the authorities. He turned snitching into a profession, paid for by the haters of Israel in Western Europe and elsewhere. He then collected funds to sue and evict Israeli settlers from their homes, turning them into refugees in their own country.

Except that this time this individual was wrong in his preachy and condescending attack on the Jewish state. As several users taught the perpetual Israel hater, Beresheet was the first moon probe – in the world – that was created entirely as a private initiative, without one penny in government assistance. It cost $100 million and all of it came from private funds, unlike Peace Now contributions that come from many European governments.

Many of the responses to Oppenheimer’s rude comment at a moment of national sadness involved his parents and the many things they had done wrong, from the point of getting married and their decisions further down the road, but this is a family newspaper. We’ll just nod our heads and say we’re not angry. We’re disappointed. 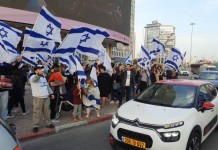