However, Lapid was forced to deliver his keynote address via Zoom, because he entered mandatory quarantine late Tuesday night after being directly exposed to the coronavirus by his aide, who is ill with the virus.


Following is the complete transcript of Lapid’s remarks to the gathering.

He lived in a small basement, much smaller than this room, with close to 600 other people.

By that time they lived mostly off the meat of dead horses they found in the street.

On that day, his mother, my grandmother, called him to her and she said, ‘Tomika, you don’t know this but today is your Bar Mitzvah.
Your dad won’t come (by then my grandfather already died in the gas chamber in the Mauthausen concentration camp),
I can’t bake a cake for you, she said, but there’s one thing I can do:
She took out a small glass bottle of “Chanel 5,” which was the perfume of elegant women, like she was before the war.
God knows how she kept it all that time.
And she broke the bottle on the floor.
And she said, “At least it will not stink on my son’s Bar Mitzvah.”

That story comes with a question: Why?

My father didn’t write the Protocols of the Elders of Zion.

He was not an international Banker.

He didn’t fit any of the stereotypes.

He was just a kid. Why did they want to murder him?

Antisemites often say, “some of my best friends are Jews.”
The absurdity is that it could well be true.

They don’t hate the Jews they know, because they know those Jews are people just like them.

They hate the Jews they don’t know, because it’s easy to hate people in groups.

The first step is the de-humanization of the person you hate.

He isn’t really a person.

He is a faceless group that you can project your fears and hatred and prejudices on to.

The Jew you know loves their children.
The Jew you don’t know, hates yours.

For too long we were on the defensive.

For too long we thought we need to tell the right story about the Jews so the antisemites will stop hating us.

I want to suggest the opposite.

It is anyone who hates so much that they want to kill and eliminate and persecute and expel people just because they are different.

The Jewish people rightly expect the world to remember the Holocaust.
The Holocaust is the extreme manifestation of hate.

It is the example of what happens to hate when no-one opposes it.

There has never been anything like the Holocaust in the history of humanity.

But modern antisemitism, the type which we face today, exists everywhere.
To fight it, we need allies.

We need to enlist everyone who believes it is wrong to persecute people just because of their faith,
their sexuality,
their gender,
their nationality,
or the color of their skin.

We need to tell them that antisemitism never ends with the Jews.

It will always move on to the next target.

The fight isn’t between antisemites and Jews.

The fight is between antisemites and anyone who believes in the values of equality, justice and liberty.

Antisemitism is hatred of foreigners, so let’s enlist anyone who was ever a foreigner and say to them, “This is your fight as well”.

If you don’t help us fight antisemitism today, it might be your child someone looks at in the future and says, “I hate him, I want him to die.” 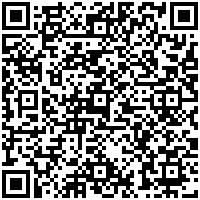