The menorah that today sits on the windowsill of the home of the family of Rabbi Dr. Akiva Posner, had once faced Nazi headquarters in Kiel, Germany in 1931. Today, Rabbi Posner’s menorah faces the front yard of his grandson’s family in Beit Shemesh, Israel.


Rabbi Posner’s wife, Rachel, who photographed the now-famous photo, perfectly grasped the symbolic meaning of the menorah over 80 years ago. Though the Nazis were not yet in power in Germany and the Nazi flag had yet to become the symbol of death to Jews, Rachel had written on the back of the picture: ‘Death to Judah,’ says the flag. ‘Judah will live forever’, respond the lights.” The photograph is dated Chanukah 5692 (1932).

Rabbi Posner, the leader of the 600-strong Jewish community of Kiel, and his family left Germany in 1933, about a year after the photo was taken. He managed to convince most of his congregation to follow him before he left. Less than a dozen Jews remained in the town by the time a large Kiel synagogue was destroyed during Kristallnacht in 1938.

The menorah made its way to the Land of Israel with the Posner family. Akiva was offered a rabbinical position by Rabbi Abraham Isaac Kook, but he refused the position saying that his community had been left back in Kiel. He settled near Haifa and became a librarian. He and his wife had three children and nine grandchildren.

Both the photo and the menorah itself “were part of the family’s history, but nobody ever made a big deal about it,” said Yehuda Mansbach, Akiva and Rachel’s grandson to Tazpit Press Service. Mansbach, a father of eight, also lives in Beit Shemesh.

Rachel Posner sent a copy of the photo to a museum in Germany after the war and the Yad Vashem museum in Israel bought the photo from the museum over a decade ago. The photo is on display in the Yad Vashem display room that tells the history of Jews in Germany prior to the rise of the Nazis.

The menorah was only added to the Yad Vashem exhibition later on because initially, no one actually knew that Rachel Posner’s descendants lived in Israel. “When people from the museum approached me and asked if they could use the menorah in the exposition, I told them, it’s not an artifact – it’s actually being used, we light it every year!” exclaimed Mansbach.

“So we agreed that the menorah would be on display during the year but that we would take it home for Hanukkah,” Yehuda Mansbach told TPS.

Two of Yehuda Mansbach’s three sons were present during this year’s Chanukah celebration, as the Mansbach family gathered to light the fourth candle. Akiva, 31, who is named after his great-grandfather, lit the famous menorah. “It actually belongs to me,” he explained. “I once took it with me for Hanukkah when I was in the army so all of my fellow soldiers learned about the story and about the words that my great-grandmother wrote on the back of the photo.”

“My mother was five when she left Germany,” Yehuda Mansbach added. “The first time I heard her telling the story of the menorah and the picture was when Israel left Sinai in 1982 and my older brother was devastated by the fact. She showed him the picture and said: ‘Judea will live forever.’” 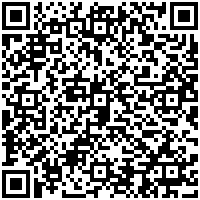