Israeli Supreme Court Justice Dafna Barak Erez has ordered Prime Minister Benjamin Netanyahu, the Government of Israel, and the Jewish Agency for Israel to respond to a petition filed with the court by Breslov hasid Sharon Scheltzer, demanding they explain why they are not working to “raise” the bones of Rabbi Nachman of Uman, the founder of the Breslov Hasidic sect, to be interred in the Holy Land.

Scheltzer, considered one of Rabbi Israel Dov Odser’s closest students, Monday night filed the petition upon hearing that Ukraine has banned all foreign Jews from entering the country this year for the annual pilgrimage to the tomb of Rebbe Nachman — a pilgrimage made each year by tens of thousands of hasidic and Orthodox Jews worldwide. Scheltzer is also the chairman of the committee for raising Rabbi Nachman’s bones to Eretz Israel, and he has been working on the issue for decade


The petition, filed by Attorney Itamar Ben Gvir on behalf of Scheltzer, states that the respondents must act to raise Rabbi Nachman’s bones to Israel “to fulfill the will of the dead.”

Rabbi Nachman wanted to be buried in Israel, he wrote, and “in cases where the leaders of the Jewish people in the Diaspora made such a request, the agency or government must act to bring them for reburial in The Land,” Ben Gvir wrote, and also “because the property of the Jewish People — the tomb of Rabbi Nachman to which many Israelis go to pray — is under foreign rule, which holds it without permission.”

The petition also states that in view of the recent announcement by the Ukrainian Foreign Minister that this year, for the first time in decades, the mass pilgrimate of Jews to Uman on Rosh Hashanah will not be allowed, the High Court is asked to hold an urgent hearing on the issue. For burial in the Land of Israel, even before the approaching Rosh Hashanah.

Moreover, the petition states that throughout the petitioner’s many years of work on the subject, senior political figures have indeed acted on the subject: In the early 1990s, then-President Chaim Herzog, addressed the Prime Minister of Ukraine during his visit to Israel, requesting the relocation of the tomb to Israel. The Ukrainian prime minister at the time granted his request, but it did not materialize. In 2007, President Shimon Peres wrote to the Committee for the Raising of Rabbi Nachman’s Bones, expressing his hope that “soon” the tomb would be relocated to its proper place in Israel.”

Therefore, in light of all of the above, the petition requests the Supreme Court orders the Government of Israel and the Jewish Agency to act to raise Rabbi Nachman’s bones to Israel.

“I have no doubt that the Supreme Court will grant us the requested remedy, which is in fact a remedy for the entire God-fearing public in the State of Israel and around the world. Raising Rabbi Nachman’s bones to Israel This is a vital need of the first order,” Scheltzer told Israel’s Channel 20 television news.

“Rabbi Nachman was a Jewish leader, a great leader of the generation, a light to Israel, who serves to this day as the Rebbe of tens of thousands of Jews,” Ben Gvir said. “There is no reason why the State of Israel, which has brought for burial in Israel the bones of other great people of the Jewish people, such as the Tzaddik Hida Herzl and Jabotinsky, and even illegal immigrants, should not work to raise the bones of Rabbi Nachman, who has many merits in reviving the Jewish nation,” he added. 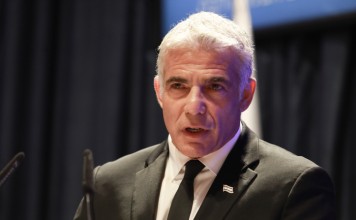