On Sunday evening, Jewish homes in the Jerusalem neighborhood of Maale HaZeitim were attacked with a barrage of Molotov cocktails, causing damage to property.

Miraculously, no injuries were reported, though some neighborhood children who were nearby the attack reported being traumatized by the event.  The attacker managed to throw approximately 10 homemade bombs at apartment buildings belonging to the Jewish neighborhood, before being scared off by a guard who fired his weapon in the air.


Maale HaZeitim is situated on the historic Mount of Olives, just south of the ancient Jewish cemetery containing 150,000 graves, including that of former Prime Minister Menachem Begin, Rabbi Avraham Yitzchak HaCohen Kook, the Ohr HaChaim, the prophetess Hulda, Hebrew language luminary Eliezer Ben Yehuda, and Hadassah founder Henrietta Szold.  It is also nestled in the Arab neighborhood of Ras al-Amoud, and has been the site of previous attacks.

The six apartment buildings of Maale HaZeitim contain 100 apartments, many of which feature views on the Old City of Jerusalem and on the Temple Mount.  Residents frequently walk to and from the Old City, which is just 15 minutes away by foot, and a few minutes ride on the Egged bus which makes stops at the community throughout the day.

“I was sitting in our living room watching a television show and I saw something I thought was fireworks, but they were so close to our apartment,” Miriam, a 10 year resident of Maale HaZeitim, told the Jewish Press.  “I called the police…. There was a fire below our garden.”  Though Miriam and her family have experienced numerous attacks since moving to the new neighborhood a decade ago – including the throwing of large rocks at her car by neighborhood Arabs as she drove with her children – “I don’t know if you can ever get used to it,” she said.

While attempted violence against Jews in Maale HaZeitim has increased since Operation Cast Lead in late 2008, according to Miriam, she says police vigilance in the area has also risen.  “We’ve had other attacks were I’ve called the police and they didn’t even send a car. Last night, they sent lots of Jerusalem police and border police,” she said.  “But as long as there’s an Arab population next to us and they feel like they’re the bosses… as long as there is growing extremism, we’ll continue to face these things.”

Aryeh King, eastern Jerusalem activist and Director of the Israel Land Fund, decried the attack as the fault of local Israeli authorities.  “The decline in security throughout Jerusalem has not spared Pisgat Ze’ev, Ramot, Shmuel HaNavi and yesterday, a targeted terror attack took place on the Maale HaZeitim neighborhood,” King told the Jewish Press.  “This is the result of the lack of decisiveness and will to come in contact with the terrorists.  This policy is directed by the police chief of Jerusalem.  This policy causes the decline of Israeli sovereignty in the various Jerusalem neighborhoods, and the increase in the last months of attacks against Jews.”

MK Dr. Aryeh Eldad told the Jewish Press: “In the last few months we are seeing a total degradation of the security situation in the Mount of Olives region. There was a case recently of an almost-lynch, where 15 youths ambushed a car by throwing paint on the windows and pelting the car with rocks. In Beit HaChoshen, one resident has had his car burned 4 times. Every day tombs are desecrated at the cemetary. Even in French Hill students are afraid to leave their dorms at night. Last night, an Arab came to the Maale HaZeitim neighborhood with 10 Molotive cocktails in a bag, then he lit a fire so that he could easily ignite his weapons. He then threw 7 cocktails.  The security saw him and shot in the air, but when the police came, and the only thing that bothered the cops is why the security fired! Nisso Shacham, the Jerusalem police chief is afraid of bad media. He wants to be national Police chief one day so he keeps a low profile, although he knows how to deal with the problem.”

Prior to the recent Passover holiday, a new police station was inaugurated on the Mount of Olives.  Minister of Internal Security Yitzhak Aharonovitch (Israel Our Home party) emphasized that the establishment of the station on the Mount of Olives is strategically important, and that it will serve to increase the security of residents and those visiting the area.

Despite the complicated nature of life in eastern Jerusalem, Miriam and her family have never questioned staying on in their neighborhood.  “Nobody ever talks about leaving.  I think the kids feel like they are living in a unique place with a purpose,” Miriam said.  “I see us as a microcosm of Israel – there are people all around us who don’t want us to be here.  We are not talking about leaving.”

Yishai Fleisher contributed to this article 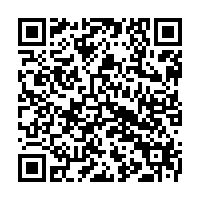