Israeli border police on Wednesday arrested for the second time an Arab who was trying to scale the security fence surrounding Jerusalem, and then, minutes before he was placed behind bars in the Ofer security prison, they discovered and removed six cellphones from his body – before he was able to distribute them to fellow inmates, the Border Police Spokesperson’s office reported.

The suspect was initially spotted by the Border Police Nitzan battalion on Tuesday evening, attempting to scale the security fence near al-Ram, just outside the capital’s north-eastern municipal boundary. He was picked up, interrogated and sent home.


He returned Wednesday night, same Arab, climbing the same section of the security fence, and picked up by the same Border Police unit.

Because of the repeat offense, the suspect was taken this time to the Ofer security prison following his interrogation, where the guards performed the full intake procedure on him, during which six cellphones were extracted from his intestines. Clearly, the entire affair had been about the suspect getting arrested so that he would be able to distribute the contraband phones among six lucky imprisoned terrorists.

Following the discovery, the suspect was taken in for yet another Border Police interrogation, which may lead to cracking the illegal terror network that paid him to deliver his precious commodities. 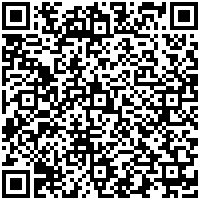