Thank you so much. It’s so great to be back with you and I bring you greetings from my boss, my friend, and Israel’s greatest ally ever to reside in the White House, President Donald Trump.

Those of you who heard me speak last year, also on Tuesday morning, at the concluding session, may recall my saying that I needed to rush back to Israel to prepare for the upcoming opening of the Jerusalem embassy. So let me update you since our last meeting.

On May 14th, 2018, at 4:00 p.m. local time, on exactly the date and time 70 years earlier that David Ben-Gurion declared Israel’s independence, the United States Embassy to Israel opened in Jerusalem.

Since that date, about 10 months ago, our American presence in Jerusalem has done nothing but grow. If you’ve been recently to the embassy building in the Jerusalem suburb of Arnona, you’ve noticed how it is a very large construction site. By the summer, it will have more than doubled in size. And with the merger of the Jerusalem consulate into the embassy, the United States Embassy in Jerusalem now includes 10 interconnected diplomatic facilities, including the iconic mission on Agron Street, Rehov Agron, right in the center of town.

Some say this is just a symbolic gesture, but I could not disagree more. The move of the embassy was the culmination of a 2,000 year old quest of the Jewish People to return to Zion, a synonym for Jerusalem.

It was a recognition by the most powerful nation on earth of the validity, the authenticity, and the morality of this ancient journey coming to fruition in our times. It was a statement by the leader of the free world that the United States stands with its friends and does not flinch from its enemies. And in a world of multiple false narratives, it was a courageous stand for honesty.

That decision was formalized just yesterday in a beautiful signing ceremony at the White House. For two generations, Israelis of all political stripes proclaimed, Ha’Am Im Ha’Golan , the nation with the Golan, which can never be severed from the State of Israel.

Israelis made this proclamation for good reason. Without the high ground of the Golan, Israel is exposed to extraordinary risks from treacherous enemies, and Syria would be right on the shores of the Sea of Galilee, which provides 40 percent of Israel’s fresh water. This will never happen on President Trump’s watch.

Lots of other important things have happened since we were together last year, too many to review in my allotted time. But one thing really stands out, the president’s decision to cause the United States to exit the JCPOA, the flawed Iran deal.

Now, I don’t want to re-litigate all the pros and cons that were the subject of so much argument in 2015. But I do want to raise one fact that is undeniable. One of the arguments against the Iran deal in 2015 was that in exchange for giving Iran more than $100 billion in cash and lifting the crippling sanctions, the United States should have insisted that Iran end its sponsorship of terrorism and its incitement against the United States and Israel and end its maligned activity in Yemen, Iraq, Syria, and Lebanon. It seemed like a reasonable, indeed, an obvious, requirement for any deal, but it wasn’t. The demand wasn’t even made.

Now, what was the justification for this terrible failure? The argument went something like this: the way to get Iran to stop yelling death to America, to stop yelling death to Israel, to stop financing terrorism, is not to ask for it. Rather, such maligned activity will self-correct as a result of Iran being allowed back into the community of nations. Just give Iran a proverbial pat on the back and a hot bowl of soup, and it will become just like any other peace loving country.

A lot of us laughed at this. But we couldn’t prove it wrong, because to do so would require clairvoyance. We couldn’t prove then what would happen in the future. But today, in hindsight, we can prove, with absolute certainty, that those who made excuses for failing to require that Iran alter its destructive behavior were 100 percent dead wrong.

What did Iran with all its newly-found treasure? Did it join the community of nations? Did is build up its civilian institutions? Did it improve the quality of life of its citizens? Did it reach out to make peace with its enemies? Of course not. It doubled down on terrorist activity in Yemen, in Iraq, and in Lebanon. It increased its stock of ballistic missiles, and it invested in military bases in Syria on Israel’s northern border. It amped up the volume on its mantra of death to America and death to Israel. And thanks to Israel’s daring intelligence services, we now know that Iran lied to everyone about its nuclear intentions.

President Trump’s exit from the Iran deal and restoration of sanctions is the single most important contribution in decades to the safety and security of the United States, Israel, and indeed the entire world. The sanctions are working. We are beginning to see their crippling effect on the Iranian regime. I shudder to think where we would be without President Trump’s courageous actions.

Many of you remember the historic words of Rabbi Yisrael Meir Lau to President Obama in 2013 at Yad Vashem with regard to the Iranian threat. Rabbi Lowe, a childhood survivor of Buchenwald, went on to become the chief rabbi of Israel. Yad Vashem, Rabbi Lowe spoke of an American Army general who approached him many years after the holocaust to beg forgiveness that the U.S. military was too late in liberating the concentration camps. Rabbi Lowe turned to President Obama at Yad Vashem and admonished Mr. President, don’t be too late.

Now, a word about the Palestinian conflict; people tell me this often, don’t touch this issue. This is the third rail of Israeli diplomacy. I am told it is the burial ground of all the envoys who have come before me, none of whom, regrettably, have much to show for a life’s work in the field.

People say, why do you need this aggravation? They say, for God’s sake, you have your name carved in stone on the Jerusalem embassy. Take a victory lap. It’s not going to get any better than this. With all that the Trump administration has done for Israel, why should we risk all that good will by addressing the thankless task of pursuing peace by seeking an end to a seemingly endless conflict? How can we? The answer, my friends, is how can we not?

Can we run the risk that one day the government of Israel will lament, why didn’t we make more progress when U.S. foreign policy was in the hands of President Trump, Vice President Pence, Secretary Pompeo, Ambassador Bolton, Jared Kushner, Jason Greenblatt, and even David Friedman? How can we do that?

The answer is, we can’t. We will continue to work with the Israeli government, with the Palestinians, with other regional players, to pursue peace, recognizing that the diversity and strength of opinions on this subject suggests there will be some turbulence along the way. We will continue to pursue peace, because we believe we can be trusted to have the correct perspective and approach.

To all of you here, to all those who may be listening to this speech in the future, to all who love Israel and support the unbreakable bond between the United States and Israel, work with us, stay with us, pray with us for peace in the Holy Land.

King David offered the following prayer some 3,000 years ago in Psalm 128: Yevarechecha Hashem miTzion, Kol y’mei, y’mei chayecha — may God bless you out of Zion and may you see the good in Jerusalem. It’s perhaps an odd choice of words in that last phrase. What was the great warrior poet telling us about seeing the good in Jerusalem?

I think that even three millennia ago, King David recognized that Israel’s enemies would seek to undermine the centrality of Jerusalem to the state of Israel and to mischaracterize and vilify the Jewish state.

He sought God’s intervention for something simple and basic that we not fall for it, that we continue to see the holiness, the beauty, the sanctity of life, and yes, the good in Jerusalem. I’d like to think that God has blessed the Trump administration in this very manner.

King David concluded his prayer, U’reh vanim levanecha, Shalom al Yisrael — may God cause us to see our children’s children and peace upon Israel, and so may it be. May God bless you. May God bless Israel. And may God bless the United States of America. Thank you so much. 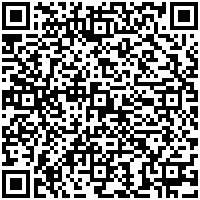