Attorney General William Barr met with six Jewish communal in Boro Park on Tuesday to discuss the recent rise in anti-Semitic crimes and incidents. The meeting was hosted by the Boro Park Jewish Community Center in its new office on 46th Street and 13th Avenue.

“I am extremely distressed by the upsurge in violent hate crimes…that we are seeing around the country,” Barr said after remarks by Rabbi Avi Greenstein, CEO of the Boro Park JCC, and an introduction by U.S. Attorney for the Eastern District Richard Donoghue.


This department will commit to “zero tolerance for these types of violent acts,” Barr said.

He announced a new directive to all U.S. attorneys across the country that will require them “to initiate or reinvigorate their relationship and outreach to the Jewish communities,” which includes providing “a point of contact for reporting hate crimes.”

He continued, “I am lowering the level of tolerance of violence against the Jewish community. Today we [unsealed] an indictment against [Tiffany Harris], who slapped three people. We are charging her for a federal hate crime. These are the kinds of crimes that in the past would have been treated locally, but I think it’s important for the federal government to plant its flag and show zero tolerance. We will move aggressively when we see this kind of activity.”

He said that when it comes to racial violence, the Department of Justice views certain acts, such as cross burnings, as “incitement.” He aims, he said, to identify similar activity directed against the Jewish community that would constitute incitement to violence as opposed to protected free speech.

Barr also noted that anti-Semitism manifests itself, not only in violence, but in discriminatory housing and zoning laws; prejudice against Jewish businesses, and “attempts to marginalize Jewish students” on college campuses. “We will continue to combat that kind of activity,” he said.

Addressing the deeper issues that may lay behind the recent surge in anti-Semitic violence, Barr said that strengthening religious values within society may be necessary. “What scares me the most is when I see the spiritual hollowing out that has been occurring in…the United States,” he said.

“There should be a separation of church and state, obviously. But we’ve always recognized that religion plays an important role in making sure a pluralistic society like ours can move forward without hatred and violence…. An important part of that is religious education – schools that have a spiritual and value dimension. That’s why I’ve long been a proponent of school choice. And I’m very concerned about restricting the freedom of religious schools.”

After Barr’s remarks, the six Jewish communal leaders in attendance were invited to share remarks and ask questions.

Rabbi Chaim Dovid Zwiebel, executive vice president of Agudath Israel of America, praised Barr’s presence at the meeting. It’s an “important and wonderful validation of your concern for what is going on, and frankly your love for the Jewish people, which I personally witnessed for over three decades,” he said.

He added, “[There’s a] concern in our corner of the world for anti-Semitism but also for the movement in society generally toward a less tolerant view of religious viewpoints and values…. We in the religious world have become bigots.”

Rabbi David Niederman, president of United Jewish Organizations of Williamsburg, urged the attorney general to examine the causes of the recent anti-Semitic attacks in New York.

“How can it happen that we have been living in Williamsburg together with our communities for a very long time, very integrated…[and a] woman in broad daylight on Yom Kippur – her wig is pulled off her head? And how can kids take a metal bar and throw it into a synagogue?” he asked.

He also pressed Barr to look into proposed regulations on yeshiva education in New York and the rights of religious inmates in prisons. “We are not going to change,” he said. “That is not gong to happen. We are going to continue to educate our children the way our rabbinical leaders laid down for us.”

He also presented the magnitude of the current problem in economic terms. “We estimate over 2,000 Jewish institutions in New York – synagogues, Jewish community centers, day schools, yeshivas. [That] doesn’t even count all the philanthropic organizations, the American Friends of Israel organizations, trade organizations.

“Six hundred of them have received not-for-profit security grants. That means 1,400 in New York alone have not. The typical grant is for $150,000, more or less, depending on need. Extrapolating those numbers, the additional unmet need is at least $200 million.”

Several leaders around the table stressed the need for additional government funds, and Barr said he would look into it, joking that people in Washington sometimes quip that there’s never enough money to solve a problem, only to keep it going.

Also present for the meeting were Rabbi Meir Soloveichik of Yeshiva University, Allen Fagin of the Orthodox Union, and Rabbi Eli Cohen of the Crown Heights Community Council.

Following the meeting, Barr sat down with The Jewish Press for an exclusive 20-minute interview. The interview will appear in next week’s issue of the paper. 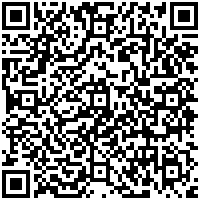