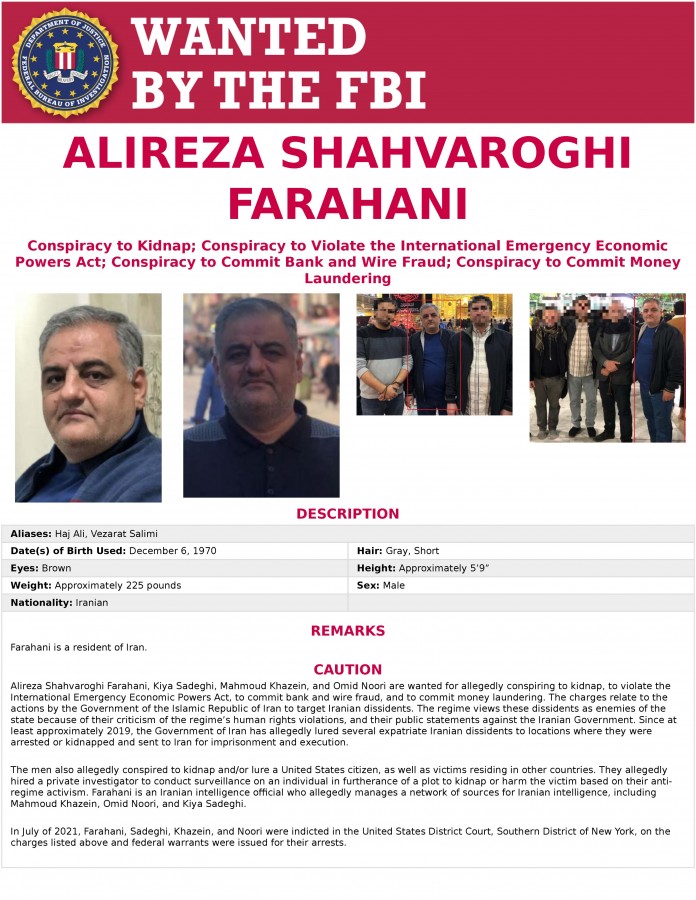 A Brooklyn-based journalist was targeted by four intelligence operatives hoping to kidnap her from her adopted country, federal authorities revealed Tuesday.

Writer and activist Masih Alinejad, a dual Iranian American national, told the New York Post in an interview Monday night that she was approached eight months ago by around “a dozen” FBI agents who warned her about the plot. Federal agents relocated Alinejad and her family in three different safe houses across New York.


The journalist said when FBI agents showed her the surveillance photos snapped by Iranian spies, “I was shocked. I got goosebumps when I saw this is my private life.”

“I am grateful to FBI for foiling the Islamic Republic of Iran’s Intelligence Ministry’s plot to kidnap me,” Alinejad said in a tweet. “This plot was orchestrated under Rouhani. This is the regime that kidnapped & executed Ruhollah Zam. They’ve also kidnapped and jailed Jamshid Sharmahd and many others,” she wrote.

I am grateful to FBI for foiling the Islamic Republic of Iran's Intelligence Ministry's plot to kidnap me. This plot was orchestrated under Rouhani.

This is the regime that kidnapped & executed Ruhollah Zam. They've also kidnapped and jailed Jamshid Sharmahd and many others pic.twitter.com/HUefdEbiil

The case is pending before US District Judge Ronnie Abrams, the Department of Justice said.

“BAHADORIFAR was arrested on July 1, 2021 in California on charges contained in an underlying indictment. BAHADORIFAR will be arraigned on the charges in the Superseding Indictment by Judge Abrams at a date and time to be set by the Court. FARAHANI, KHAZEIN, SADEGHI, and NOORI, all of whom are based in Iran, remain at large,” the indictment said.

In a “statement for VOAIran about the Islamic Republic of Iran’s Ministry of Intelligence plot to kidnap me from Brooklyn,” Alinejad wrote “I’m glad to be alive and appreciate your support. Spare a thought for many other Iranian dissidents kidnapped and executed by this regime,” she said.

This is my latest statement for @VOAIran about the Islamic Republic of Iran's Ministry of Intelligence plot to kidnap me from Brooklyn. I'm glad to be alive and appreciate your support.

Spare a thought for many other Iranian dissidents kidnapped and executed by this regime pic.twitter.com/bts6WR7D5Q

“As alleged, four of the defendants monitored and planned to kidnap a U.S. citizen of Iranian origin who has been critical of the regime’s autocracy, and to forcibly take their intended victim to Iran, where the victim’s fate would have been uncertain at best,” Strauss said in her announcement.

“Among this country’s most cherished freedoms is the right to speak one’s mind without fear of government reprisal. A US citizen living in the United States must be able to advocate for human rights without being targeted by foreign intelligence operatives. Thanks to the FBI’s exposure of their alleged scheme, these defendants have failed to silence criticism by forcible abduction.”

Alinejad, an author and human rights activist in addition to her role as a journalist, has actively publicized the human rights abuses by the government of Iran – activities which federal agents said could have cost her her life.

“We allege a group, backed by the Iranian government, conspired to kidnap a US based journalist here on our soil and forcibly return her to Iran. Not on our watch. FBI special agents and analysts will continue to aggressively hunt for foreign operatives who attempt illegal action inside our borders or against our citizens. Working side-by-side with our international partners, the FBI’s reach is global. When we find you, you will be brought here and held accountable under US law.”

Prior to the plot to abduct her on US soil, the Government of Iran attempted to lure Alinejad to a third country in order to capture her and smuggle her to Iran. In approximately 2018, Iranian government officials attempted to induce her relatives who reside in Iran to invite the Iranian dissident to travel to a third country for the apparent purpose of having her arrested or detained and transported to Iran for imprisonment.

Alinejad’s relatives bravely chose not to accept the offer, however.

Iranian intelligence services have previously lured other Iranian dissidents from France and from the United States for the purposes of capturing and imprisoning regime critics and have publicly claimed responsibility for these capture operations, the FBI said.

“An electronic device used by FARAHANI contains, among other things, a photo of Alinejad alongside photos of two other individuals, both of whom were captured by Iranian intelligence, with one later executed and the other imprisoned in Iran, and a caption in Farsi stating, “Gradually the gathering gets bigger… Are you coming, or should we come for you?”

The network that FARAHANI directs has also targeted victims in other countries, including victims in Canada, the United Kingdom, and the United Arab Emirates, and has worked to procure similar surveillance of those victims.

The case is being handled by the Office’s Terrorism and International Narcotics Unit.