The fight against BDS, the Boycott, Divest & Sanctions economic war on Israel, is heating up in the tri-state area.

The third largest pension/retirement fund in the United States is joining private companies in New York on the front lines in a battle against Unilever and Ben & Jerry’s, according to a report by The New York Post.


Global Unilever CEO Alan Jope was warned Friday in a letter sent by New York State’s main pension fund for its government workers and retirees that its own corporation and its subsidiary Ben & Jerry’s Global, could themselves face a boycott in New York.

The company was given 90 days to respond.

The move comes as a response to Ben & Jerry’s announced decision last week to end sales of its product in post-1967 areas of Israel, such as a large portion of the capital, Jerusalem, as well as Jewish communities in Judea and Samaria.

The letter written by Liz Gordon, executive director of corporate governance for the NYS Common Retirement Fund, (itself worth about $254.8 billion) notified Jope that State Comptroller Thomas DiNapoli “is troubled and concerned” by the decision. 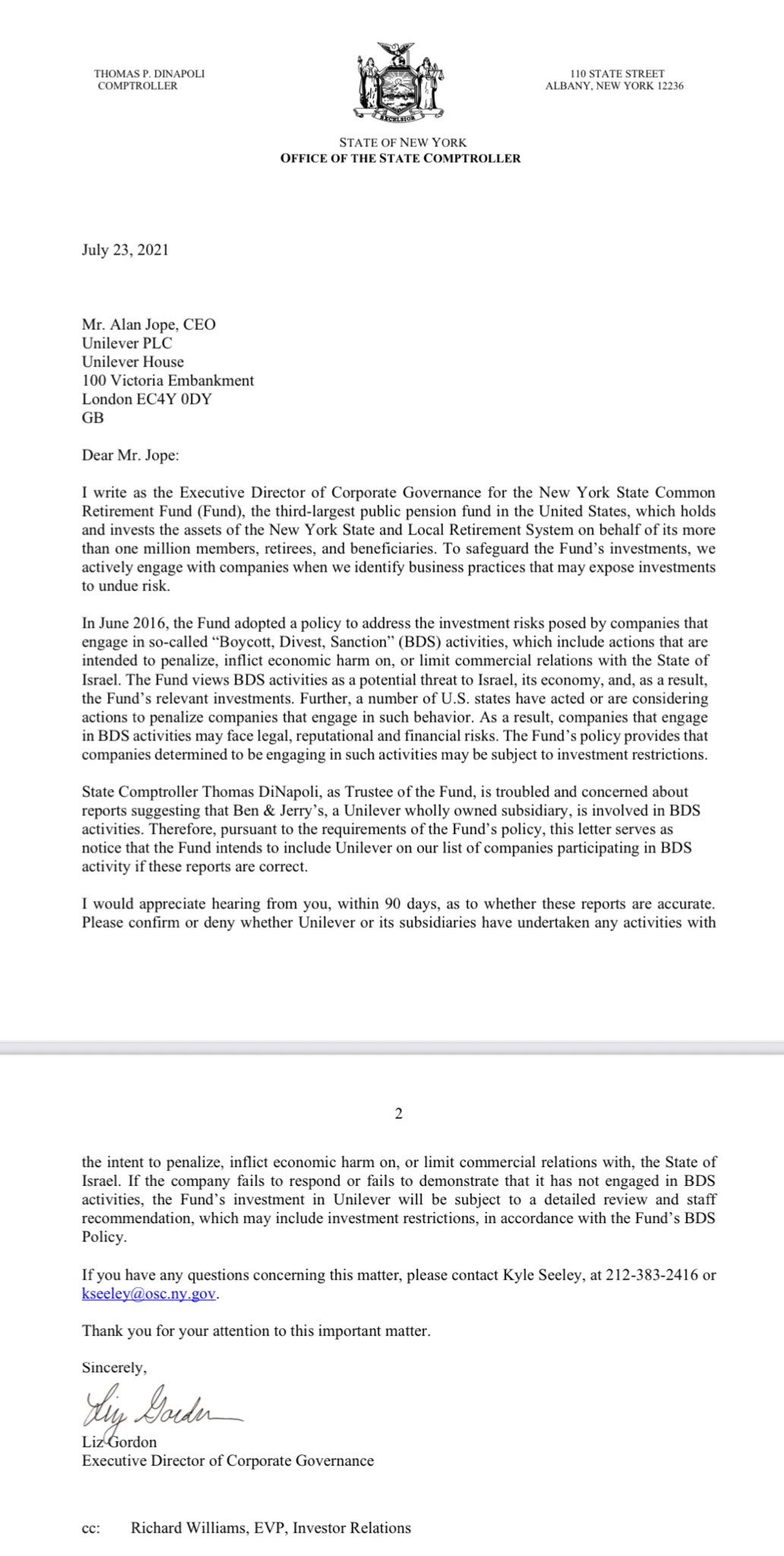 The letter warned the company, “The Fund intends to include Unilever on our list of companies participating in BDS activity if these reports are correct,” Gordon wrote.

“If the company fails to respond or fails to demonstrate that it has not engaged in BDS activities, the Fund’s investment in Unilever will be subject to a detailed review and staff recommendation, which may include investment restrictions, in accordance with the Fund’s BDS Policy.”

Nassau County Executive Laura Curran said she also is disappointed with the ice cream company’s decision. Curran issued a statement saying, “I am disappointed by Ben & Jerry’s decision to align itself with the anti-Israel BDS movement, which unfairly and dangerously singles out the world’s only Jewish State.

“I strongly oppose the BDS movement and have worked hard to strengthen the relationship between Israel and Nassau during my time as County Executive. As a County Legislator, I voted to prohibit the County from doing business with companies or individuals involved in the discriminatory BDS movement. This has been my long-standing position.”

Some business owners in New York are already taking action.

Avi Kaner, co-owner of Morton Williams Supermarkets, said his chain has “taken action against Ben & Jerry’s, which is boycotting Jewish communities that are at the center of a territorial dispute in Israel, including the Jewish Quarter of Jerusalem – inhabited by Jews for over 3,000 years.”

Our supermarkets have taken action against Ben & Jerry’s, which is boycotting Jewish communities that are at the center of a territorial dispute in Israel, including the Jewish Quarter of Jerusalem – inhabited by Jews for over 3,000 years. https://t.co/IFoJhSBSWM

Kaner also sent kudos to his “fellow supermarket owner” John Catsimaditis who joined Kaner in taking action against the BDS-supporting ice cream company. “All major Manhattan supermarket chains, Morton Williams, Gristedes and D’Agostinos, have now taken action against Ben & Jerry’s extremist board. We are waiting to hear from @unileverusa,” he added.

John Catsimatidis, owner, president, chairman, and CEO of Gristedes Foods, a grocery chain in Manhattan, and the Red Apple Group, a real estate and aviation company with about $2 billion in holdings in New York, Florida and Pennsylvania, announced Friday that he has “authorized our stores to cut Ben & Jerry’s space by 30 percent and not advertise until further notice.”

I authorized our stores to cut Ben & Jerry’s space by 30% & not
advertise until further notice. It’s a tragedy that Ben & Jerry’s has politicized ice cream. I like Haagen Dazs better created by a South Bronx family who is pro-Israel. John Catsimatidis CEO @JoePotasnik @The_Appeal

It turns out that Ben & Jerry’s extremist board chair Anuradha Mittal @Mittaloak has publicly supported terror groups Hezbollah and Hamas Muslim Brotherhood. Is this who @Unilever relies on for business decisions? https://t.co/f1WVRU5L71

US Representative Lee Zeldin (R-NY) also urged New York State to “follow its own Executive Order, lead by example, and disassociate entirely from Unilever and Ben & Jerry’s for their anti-Israel and anti-Jewish discrimination.”

New York State needs to follow its own Executive Order, lead by example, and disassociate entirely from Unilever and Ben & Jerry’s for their anti-Israel and anti-Jewish discrimination. Read my full statement⬇️ pic.twitter.com/VbcMbegTez

“The decision by Unilever and Ben & Jerry’s to target hundreds of thousands of Jewish customers abroad with this discriminatory boycott is a disgrace and a direct embrace of the anti-Israel BDS movement,” Zeldin said in a statement earlier this week. “New York State must now follow the 2016 Executive Order that prohibits state agencies from conducting business with institutions or companies that promote BDS, and requires the OGS Commissioner to maintain and update a list of entitles participating in BDS. Both Ben & Jerry’s and Unilever need to be immediately added to the OGS list, and the state needs to end any current business and suspend any future business with either company. Our state needs to follow its self-imposed standards, lead by example, and stand up to this anti-Israel and anti-Jewish discrimination.”

Zeldin added that the BDS movement “issued a statement of support for the Ben and Jerry’s boycott.”

The BDS Movement wrote in a tweet Thursday, “Our major #BDSsuccess with @benandjerry’s sent shock waves through apartheid Israel reiterating its fear of the nonviolent BDS movement & its growing, strategic impact worldwide on isolating Israel’s regime of oppression against the Indigenous Palestinians.”

Just a few days earlier, within hours of Ben & Jerry’s issuing its announcement, the anti-Israel organization wrote in a tweet,

“Following years of #BDS campaigns @benandjerrys has announced it will end sales of its ice cream in Israel’s illegal settlements on stolen Palestinian land. We warmly welcome their decision but call on Ben & Jerry’s to end all operations in apartheid Israel.”

Following years of #BDS campaigns @benandjerrys has announced it will end sales of its ice cream in Israel’s illegal settlements on stolen Palestinian land.

We warmly welcome their decision but call on Ben & Jerry’s to end all operations in apartheid Israel.#BDSsuccess pic.twitter.com/0n1AjnPFaA

The State of New Jersey is also reviewing whether to divest its investments in Ben & Jerry’s – and for that matter, those in its parent company, Unilever – in response to the company’s decision to join the BDS economic war on Israel.

Despite the risk of losing jobs in his state, press secretary Alyana Alfaro Post quoted New Jersey Governor Phil Murphy in a statement Thursday in which he said he “was disappointed in the decision by Ben and Jerry’s. . .The Governor believes we must continue working toward the shared goal of peace and mutual respect.”

Unilever, which owns hundreds of consumer brands including Dove, Lipton, Hellman’s and Vaseline, has 1,600 employees in New Jersey at its 321,000 square foot headquarters in Englewood Cliff.

“The law is clear,” noted former New Jersey Governor Chris Christie. “This law was passed in 2016 and I signed into law. It is not optional; it is the law of NJ. The Governor should order the pension fund to divest from Unilever stock.”

The law is absolutely clear. Unilever has permitted Ben & Jerry’s to engage in conduct that violates NJ law. The Governor must order divestment by the state. That’s both what the law says and what it intended. I should know—I signed it. https://t.co/jENNrfuIbv

Arizona Joins the Fight
In addition to New York and New Jersey, Arizona has also joined Texas, Oklahoma and Florida in their warnings of possible divestiture to Unilever and Ben & Jerry’s.

Arizona Governor Doug Ducey announced Friday that he believes the decision by the extremist board of Ben & Jerrys’ “is discrimination.”

Ducey added in a Twitter announcement that his state also “will not do business with a company that boycotts Israel – in 2016 and 2019 I signed bills to make sure of it. 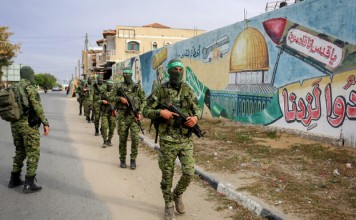 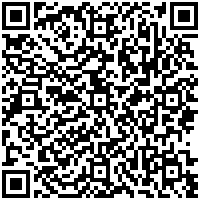