A black attacker armed with a machete on Saturday night stabbed five Jews at Rabbi Chaim Rottenberg’s home at 49 Forshay Rd in Monsey, New York, and ran away, in an attack that followed a dozen anti-Semitic assaults on religious Jewish men, women and children (two assault victims were 6 and 7, one was 3) since the start of December – including the murder of two Chassidim in a kosher market in Jersey City. The vast majority of these attacks were carried out by black men and women.

These are the names of the victims who could use a prayer for their speedy recovery: Yosef ben Perel, who underwent heart surgery, Shlomo ben Vittel, Meir Yehosef ben Vittel, and Naftali Tzvi ben Gila.


The Orthodox Jewish Public Affairs Council tweeted an account of the event shortly after it had taken place:

“At 9:50 this eve, a call came in about a mass stabbing at 47 Forshay Road in Monsey (Rockland County; 30 miles North of NYC). It’s the house of a Hasidic Rabbi. 5 patients with stab wounds, all Hasidic, were transported to local hospitals.”

“2 of the victims of the attack were taken into hospital as critical. The perp’s face was partially covered with a scarf but skin showed him to be an African-American.”

“One of the victims was stabbed at least 6 times. The fifth/least severe case had a cut in his hand. Perp left in a vehicle with tag number HPT-5757 per the person who saw it and we confirmed it with him directly (but it was dark and rushed.) a Gray Nissan Sentra.”

New York Attorney General Letitia James tweeted in response to the attack: “I am deeply disturbed by the situation unfolding in Monsey, New York tonight. There is zero tolerance for acts of hate of any kind and we will continue to monitor this horrific situation. I stand with the Jewish community tonight and every night.”

Governor Andrew Cuomo tweeted: “I am horrified by the stabbing of multiple people at a synagogue in Rockland County tonight. We have zero tolerance for anti-Semitism in NY and we will hold the attacker accountable to the fullest extent of the law. NY stands with the Jewish community.”

Julián Castro, who served in President Obama’s cabinet and is currently running for the Democratic presidential nomination, tweeted: “Heartbreaking news out of Monsey, New York tonight. My thoughts are with the Jewish community as they cope with what appears to be another hateful attack on their humanity during Hanukkah. We must combat the rise of anti-Semitism and hate.” Castro was a no-show at the American Israel Public Affairs Committee (AIPAC) conference this year, and pledged to a J Street conference that as president he would launch a pressure campaign on Israel to submit to the 2-state solution.

Meanehile, VosIzNeias relased this video of Rabbi Rottenberg’s Melaveh Malka talk after the attack on his guests:

VIDEO: Rabbi Rottenberg Speaks About The Attack At Melava Malka In His Shul https://t.co/iGYXfEThhn 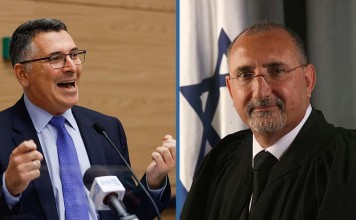